You are in: Home > 2021. 69th Edition  > News > San Sebastian Festival, Kutxa Fundazioa and Elías Querejeta Zine Eskola look back at the changes experienced by the Festival during the Spanish Transition

Archive
2021. 69th Edition - 17-25 September
A Graphic Look
Donostia Award
Awards
Sections and films
Posters
Festival Diary
Photo day by day
Activities report
San Sebastian Festival, Kutxa Fundazioa and Elías Querejeta Zine Eskola look back at the changes experienced by the Festival during the Spanish Transition
Kutxa Kultur Plaza will host, until 20 February 2022, an exhibition including 30 photographs portraying a decade marked by experimentation and the shift to democracy, but also by profound instability
The show ‘Festival in transition: the San Sebastian International Film Festival in times of change (1976-1985)’ is curated by the team of the research project ‘Zinemaldia 70. All possible stories”
Thursday, December 16th, 2021
Facebook Twitter Email
Send page by email
Print
Send page by email

The exhibition Festival in transition: the San Sebastian International Film Festival in times of change (1976-1985) opened today in Kutxa Kultur Plaza, on Tabakalera’s fourth floor, organised by the Festival, the Kutxa Fundazioa and the Elías Querejeta Zine Eskola (EQZE). The show includes 30 photographs looking at how the Festival tackled the years of the Spanish Transition, a decade marked by experimentation and the shift to democracy, but also by profound instability.

The exhibition is curated by the team of the Zinemaldia 70. All possible stories research project, directed by Pablo La Parra Pérez.


RUPTURES OF THE TRANSITION

While the show running last February rescued historic images revealing “other approaches” to the Festival’s early years, this second exhibition focuses on “some of the ruptures” to have taken place during the years of the Spanish Transition in the shape of some thirty images from the Festival and Fototeka Kutxa archive photo collections.

From 1977, the Festival management was taken over by San Sebastian City Council following three decades of archaic structure under Franco. The Board of Governors started to welcome new voices particularly including artists opposed to the Franco regime like Nestor Basterretxea and Eduardo Chillida, in addition to representatives of residents’ associations, film clubs and individuals devoted to survival of the Festival such as José Ángel Herrero-Velarde and Luis Gasca.

During these years, San Sebastian became a meeting point and place of homage to filmmakers in exile and censured by Franco’s dictatorship. The Festival broke away from its elitist tradition to introduce more democratic audiences on extending its screenings and talks to working neighbourhoods and municipalities throughout the Basque Country thanks to its Barrios y Pueblos section. The screens welcomed new creators including Iván Zulueta and Pedro Almodóvar, who can be seen in the Kutxa Kultur exhibition alongside, among others, Pilar Miró, Antxon Eceiza, Rafael Ruiz Balerdi, Mariano Ferrer and Mirentxu Loyarte.

The Festival turned to new languages in the shape of pioneer initiatives such as the Festival Vídeo, created and directed by Guadalupe Echevarría between 1982 and 1984, while the cinemas were becoming sounding boards for the struggles underway at the time. From the insumisión movement of those who refused to do their military service to the Basque conflict, and from denunciation of the Latin American dictatorship (some photographs document the demonstrations against Pinochet and Somoza held outside the Victoria Eugenia Theatre) to the demands of the feminist and LGBTIQ+ movements, images abound of artists including Alaska, Bibiana Fernández, José Pérez Ocaña and Ángel Pavlovsky.

In short, the exhibition invites you to delve into those years of change experienced by the Festival during the Transition, years when the foundations were lain for many of the identifying features that define San Sebastian Festival as it stands today, four decades down the line.


THOUGHT AND DISCUSSION ON THE FESTIVAL’S PAST

In 2020, the Z70 project, result of the joint work carried out by the Festival and the EQZE, began to address the Festival’s photographic heritage in two lines of work: conservation, classification and research of the Festival archive photo collection and the study and perfecting of the Fototeka Kutxa collection classification. The project aims to highlight the importance of the documents (letters, photographs, press archive, books and magazines...) stored in the Festival archive since 1953. It also aspires to prompt thought and discussion on the past, present and future of the Festival, together with dialogue critical towards film creation and contemporary thought. 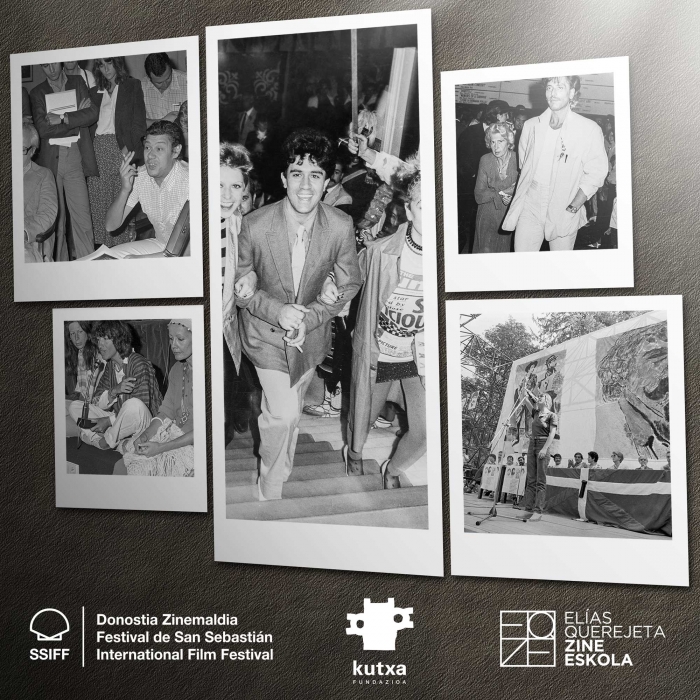