The shy, quiet boy playing a young Islamic terrorist with an extraordinary sense of smell in Laberinto de pasiones (Pedro Almodóvar, 1982) is now a major international star responsible for opening the doors to an entire up-and-coming generation of Spanish actors who have gone on to triumph the world over.

Antonio Banderas was born in 1960 in Malaga. His vocation soon led him to study at the Escuela de Arte Dramático and join independent theatre companies. He moved to Madrid in the early 80s, urged by Pedro Almodóvar, who gave him a small part in his second film, Laberinto de pasiones. A tireless worker, Banderas alternated films by Almodóvar, Matador (1986), La ley del deseo (1987), Mujeres al borde de un ataque de nervios (Women on the Verge of a Nervous Breakdown, 1988) and ¡Átame! (Tie Me Up! Tie Me Down! 1988), with others offering him the opportunity to demonstrate his full range of talents: from the comedy of La corte de Faraón (The Court of the Pharaoh, José Luis García Sánchez (1985) to the dramatism of Réquiem por un campesino español (Francisco Betriú, 1985) or 27 horas (Montxo Armendariz, 1986). Buoyed by these excellent supporting roles, he progressed to play the leading parts in La blanca paloma (The White Dove, Juan Miñón, 1989), Best Actor Award at Valladolid, Si te dicen que caí (If They Tell You I Fell, Vicente Aranda, 1989), Bajarse al moro (Going Down in Morocco, Fernando Colomo, 1989) and Contra el viento (Against the Wind, Paco Periñán, 1990). He later continued his career in Spanish cinema until, having captured international attention in Almodóvar’s movies; he was hired to play one of the Castillo brothers in The Mambo Kings (Arne Glimcher, 1992). This was followed by a part under the orders of Carlos Saura in ¡Dispara! (Shoot! 1993).

Banderas soon displayed a desire to prove his worth in Hollywood with widely differing parts such as those in The House of the Spirits (Bille August, 1993), his famous character in Philadelphia (Jonathan Demme, 1993) alongside Tom Hanks, or his work in Interview with the Vampire: the Vampire Chronicles (Neil Jordan, 1994), with Tom Cruise and Brad Pitt. Director Robert Rodriguez paved his way into action cinema with Desperado (1995), followed by Assassins (Richard Donner, 1995), by which time he had forged a place in American cinema. He once again worked with a Spanish director in Two Much (Fernando Trueba, 1995), during the shooting of which he met the actress Melanie Griffith, to whom he has been married since 1996.

By now living in Hollywood, he worked one after the other on two of the most brilliant and popular parts in his career: Ché in the musical Evita (Alan Parker, 1996), demonstrating his singing skills, and The Mask of Zorro (Martin Campbell, 1998), reinventing with enormous wit and vitality one of the great figures of adventure movies, continued in its sequel The Legend of Zorro (2005). Epic adventure in The 13th Warrior (John McTiernan, 1999), thriller with Never Talk To Strangers (Peter Hall, 1995) and Femme fatale (Brian de Palma, 2002), comedy in The White River Kid (Arne Glimcher, 1999), family movies in the saga launched with Spy Kids (Robert Rodriguez, 2001), romantic drama in The Other Man (Richard Eyre, 2008)… no genre resists an actor who has shunned type-casting and broken down all prejudices. Using nothing but his voice, he was also able to convey a sense of strong entity to another of his most famous characters, the Puss in Boots of Shrek 2 (2004) and Shrek the Third (2005).

Banderas has also enjoyed triumph on the stages of Broadway, with his part in Nine (2003), for which he bagged a Tony nomination as best actor in addition to the New York Critics Award and the Drama Desk Award. He was moreover the first Spanish actor to receive a Golden Globe nomination, a distinction he has obtained three times, for Evita (1996), The Mask of Zorro and the TV film And Starring Pancho Villa as Himself (Bruce Beresford, 2003). He is also the first Spanish actor to have received Tony and Emmy Award nominations, for And Starring Pancho Villa as Himself. Banderas holds the Spanish Film Academy’s Gold Medal and two European Academy Awards for The Mask of Zorro and Crazy in Alabama.

But, in addition to being an actor, singer and producer, Antonio Banderas has also directed two films in which he places his stakes on personal, groundbreaking cinema: Crazy in Alabama (1999) and El camino de los ingleses (2006), partly shot in his native Malaga and winner of the Europa Cinemas Label at Berlin Festival. Antonio Banderas has presented at San Sebastian Festival many of the films in which he has participated, including, among others La corte de Faraón (Silver Shell in 1985), 27 horas (Silver Shell in 1986), Si te dicen que caí, Contra el viento, The Mask of Zorro and Crazy in Alabama. 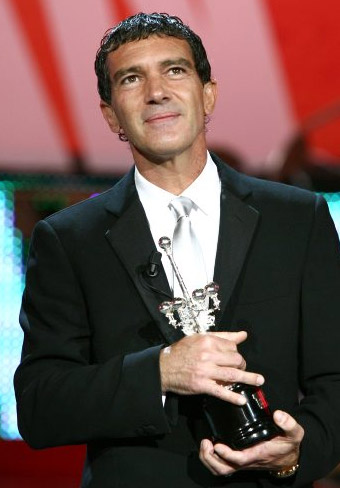 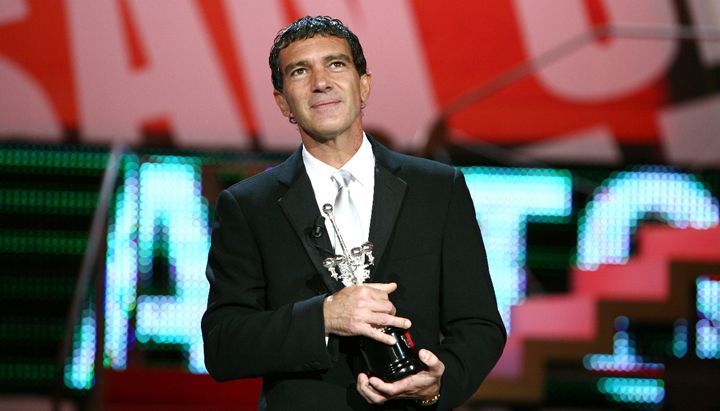