The 58th edition of San Sebastian Festival will dedicate a complete retrospective to the work of North American director Don Siegel, creator of pivotal B-movies such as Invasion of the Body Snatchers, (1956), renovator of detective movies in the 60s and 70s with The Killers (1964) and Dirty Harry (1971), and mentor to Clint Eastwood as an actor and director. True to its endeavour of looking at the not always sufficiently appreciated work of outstanding classic moviemakers, San Sebastian Festival will offer a complete perspective of Siegel’s three decades of enormous influence on genre cinema seen from a non-conformist and revitalising point of view.

“He encouraged me to direct and I encouraged him to act…I think if there is one thing I learned from Don Siegel, it’s to know what you want to shoot and to know what you’re seeing when you see it, and that’s something I haven’t seen a lot of over the years.” Those were the words of Clint Eastwood on the subject of his friend Don Siegel, for whom he worked as an actor in five movies, including Dirty Harry (1971) and Escape from Alcatraz (1979). Siegel’s style, direct, always focussing on the essence of the tale set around an energetic, striking rhythm forged in the editing room, had a tremendous influence on Eastwood’s films as a director, while moving in similar spheres to other moviemakers figuring among the ranks of the so-called “generation of violence”: Robert Aldrich, Richard Fleischer, Samuel Fuller, Richard Brooks and Nicholas Ray.

Don Siegel (Chicago, 1912-Nipomo, California, 1991) made people sit up and notice from his very first steps in the directing world: his first shorts, Star in the Night (1945) and Hitler Lives (1945) garnered Oscars the same year, 1946, in the Best Short (Live Action) and Best Documentary (Short Subject) categories.

But by that time Don Siegel was already greatly appreciated for his editing skills. Having studied at Cambridge (UK), he landed a job in Hollywood at the Warner Bros. Studios, where he worked on the montage of several films, many of which went uncredited. Some of the most noteworthy among these are works by Anatole Litvak (Confessions of a Nazi Spy, 1939; All This and Heaven Too, 1940), Raoul Walsh (The Roaring Twenties, 1939; They Drive by Night, 1940; They Died with Their Boots On, 1941 and Gentleman Jim, 1942) and Michael Curtiz (Mission to Moscow, 1943).

Following his two prize-winning shorts, he made his feature directorial debut with The Verdict (1946), the first in a series of small productions with which Siegel succeeded in surpassing B-series limitations to contribute fine titles to different genres in the 50s: film noir and thrillerwith The Big Steal (1949), Count the Hours (1953) and Private Hell 36 (1954); western with The Duel at Silver Creek (1952) and, above all, science fiction with one of the key titles in the arena of political, scientific and extraterrestrial paranoia: Invasion of the Body Snatchers (1956).

Accustomed to working unflaggingly and coaxing maximum expressiveness from limited resources, in 1960 he directed Elvis Presley in Flaming Star (1960), a stepping stone leading to productions of greater scope. While also working for TV, the 60s saw him produce two enormously important movies revamping the thriller and crime genres: The Killers (1964), headlining Lee Marvin and Angie Dickinson, and Madigan (1968) with Richard Widmark and Henry Fonda, giving rise to a TV series with the same title. That same year, he started working with Clint Eastwood on the thriller Coogan’s Bluff (1968), followed by the western Two Mules for Sister Sara (1970), the disturbing The Beguiled (1971) and the mythical Dirty Harry, an icon of crime and action movies in the 70s. The fifth and last collaboration between Eastwood and Siegel arrived towards the end of the decade with Escape from Alcatraz (1979).

Don Siegel, occasional actor in his own movies, also had parts in Clint Eastwood’s directorial debut, Play Misty for Me (1971) and in the remake of Invasion of the Body Snatchers (1978) directed by Philip Kaufman.

The 58th San Sebastian Festival will have a second retrospective, to be announced at a later date.

DON SIEGEL. Films in the retrospective 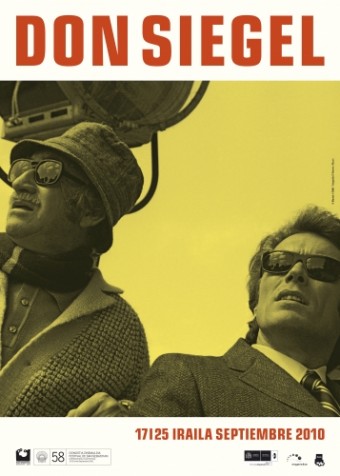