“All that can be said in silence, with a mere look, gesture or action. The power of suggestion”.

“Asier Altuna’s most lyrical film and his most beautiful”.

“It is a well-narrated film with very aesthetic images and a particular atmosphere”.

“Old and new. Classicism and modernity. All these urges are contained in one film”.

“A poem with undeniable strength, authenticity and capacity for suggestion”.

“This is an intelligent, sensitive, good-looking, sexually frank Gallic comedy”. 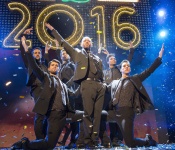 “The idea of a New Year special staged in a TV studio in October, featuring a ‘live’ audience of hired extras (…), is a potent metaphor for the emptiness of today’s prime-time television culture and the society it reflects, or has generated”.

“Sparrows is a well-rounded, consistent, beautiful, very dignified film. It succeeds in showing us daily life in a way which is completely natural and realistic while (…) avoiding morbidity and sentimentality”.

“A dark and murky piece of fiction which uses images from documentaries to create a dialogue with the history of the country through the iconic figure of Evita”.

“Anomalisa (…) is one of the best films of the year, pure and simple”.

“Koreeda stands firm against modern fashion and, instead of defending a thesis that supports human cruelty, calls on us to believe in the miracle of life (…) it shows us that there is love beyond that of a couple relationship.”

“It creates a complex, intimate universe where autobiographical details merge with countless references to literature and cinema”.

“Very enjoyable and fun, (…) it gives us a chance to spend a moment that’s worth remembering”.