You are in: Home > 2019. 67th Edition  > News > Ikusmira Berriak programme extends its residency period from six to eight weeks

The Ikusmira Berria residency programme for the development of audiovisual projects, organised by the San Sebastian Festival, Tabakalera International Centre for Contemporary Culture and the Elías Querejeta Zine Eskola (EQZE), will extend the period of its residency from six to eight weeks. Furthermore, as of this year, EQZE students can submit their projects to Ikusmira Berriak together with participants in the Nest Film Students initiative and filmmakers from the Basque Country, Spain and all other countries.

The call for submissions for the sixth edition of Ikusmira Berriak will open on July 1 and close on August 30. The five selected works will be announced in November. Each project will receive a development grant of 5,000 euros, which will be delivered in May, halfway through the two residency periods, in order that the filmmakers may better administer their resources and get the most out of the experience.

The first part of the residency will run from 2 March-12 April 2020, lasting for six weeks instead of four. From April to September, the directors will continue to work on their projects and will receive online tutoring from the committee of experts, once again with Sergio Oksman, who is joined this time round by the producer Eugenia Mumenthaler and the programmer Javier Martín. In September, coinciding with the Festival dates, the filmmakers will return to San Sebastian to complete the last weeks of the residency, bringing their projects at a more developed stage to share them with the film industry. During this stage, a pitching session will be organised at which they will present their projects with a view to organising meetings with some of the more than 1,500 industry professionals present at the Festival.

From the projects corresponding to the current edition of Ikusmira Berriak, Sin dolor (Michael Wahrmann) has been selected for the TorinoFilmLab and Un personaje volador (Martina Juncadella) has won the ARTEKino award given by the Bafici (Buenos Aires) development and co-production platform. Earlier titles too have landed awards and have been selected for international festivals: El agua (Water), by Elena López Riera, Pornomelancolía (previously ‘El oasis’) by Manuel Abramovich, and Dormen os peixes de olhos abertos (Do Fish Sleep With Their Eyes Open?), by Nele Wohlatz.

918 gau (918 Nights, Arantza Santesteban) is in the middle of filming, and both Chupacabra (Grigory Kolomitsev) and Stephanie (Leonardo Van Dijl) will start shooting in August, the same month scheduled for the completion of Eles transportan a morte (Samuel M. Delgado and Helena Girón). Furthermore, Las letras de Jordi (Jordi's Letters, Maider Fernández Iriarte) and Fantasía (Aitor and Amaia Merino) are at the post-production stage, while the last six months have seen the premiere of Muga deitzen da pausoa (Maider Oleaga), presented at the Gijón Festival, and Trote (Trot, Xacio Baño), premiered at Locarno and selected for Zabaltegi-Tabakalera.

Ikusmira Berriak is a programme providing support to audiovisual projects organised by Tabakalera, the Festival and the Elías Querejeta Zine Eskola, which has the collaboration of REC Grabaketa Estudioa and the Filmoteca Vasca, and is part of the legacy left by San Sebastian, European Capital of Culture 2016. 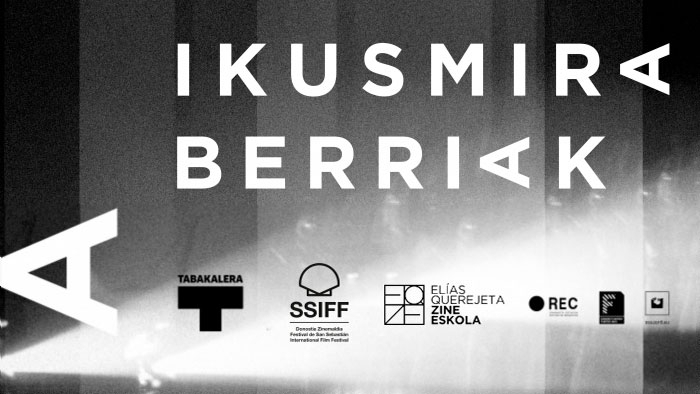