Log-in to My Festival | New user
My Festival
My Invoices
Virtual pressbox
• All films
Log-in details
Contact
CONTENT
You are in: Home > 2019. 67th Edition  > News > For the first time, the San Sebastian Festival shares its documentary archive with the citizens

The founder of the distribution company Ciné-Femmes International, Vivian Ostrovsky, will recall the cycle of films made by women which ran in 1978.

There will be a screening of ‘Expediente’, directed by Carlos Rodríguez Sanz and Manuel Coronado, Golden Shell for best short film in 1977, and a performative intervention by Luis López Carrasco and Raúl Liarte.

For the first time, the San Sebastian Festival will open its documentary archive to citizens at a day open to the public on Saturday December 7 in Tabakalera, where the results of the first research work carried out under the project Zinemaldia 70. All possible stories will be presented. The initiative is headed by the Festival, the Elías Querejeta Zine Eskola (EQZE) and  the Tabakalera International Centre for Contemporary Culture in collaboration with the Basque Film Archive. With the sponsorship of Loterías y Apuestas del Estado, its objective is to generate a living archive of the Festival and its first stage will culminate at the 70th edition in 2022.

In the project's first year of activity, eight students from the school and Pablo La Parra Pérez, coordinator of the Research Department and principal researcher of the Zinemaldia 70 project, have studied the Festival's evolution in the early years of the Transition (1976-1980) based on the documents conserved in the Festival archive collection. Precisely in this first public act a reflection will be made on two key programmes of that time. On the one hand, we will recall the cycle of films made by women which ran in 1978, to do which we have invited the co-founder of the distribution company Ciné-Femmes International, Vivian Ostrovsky, who will take her place at a round table alongside the filmmaker Cecilia Bartolomé and Ana Ureta, one of the activists of the event promotors, Donostia Women's Assembly. On the other, there will be a screening of Expediente, winner of the Golden Shell for best short film in 1977, while the filmmakers Luis López Carrasco and Raúl Liarte will provide a performative intervention with the screening of materials as yet unseen in the film theatre.

To date, the main work of the research team has consisted of analysing the democratic transformations of the Festival in the years of the Transition when, in an intense climate of political mobilisation in the Basque Country, the Festival established unheard-of collaborations with neighbourhood, feminist and gay liberation movements, opening its programme to new aesthetic and political points of view which had been censured during the dictatorship.

The public programme for 7 December will start in the morning (11:00) with the conference The Festival has had 24 editions. We don't like it, when Pablo La Parra Pérez will explain the main transformations experienced by the Festival during the Transition, making a comparative analysis of the changes experienced by other international contests in contexts of political and social unrest. Next, the students Antonio M. Arenas, Sara Hernández, Clara Rus and Neus Sabaté, students at the EQZE and members of the Zinemaldia 70 project team, will present case studies on the specific endeavours made to bring democracy to the Festival in the second half of the 70s.

The first afternoon session (17:00) will recall the cycle of films made by women hosted by the Festival in 1978 and which brought to the city filmmakers such as Agnès Varda, Věra Chytilová, Larisa Sheptiko, Pilar Miró and Mirentxu Loyarte, among others. That gathering was an initiative of the Donostia Women's Assembly, which organised the event to draw attention to its feminist agenda. One of its members, Ana Ureta, will remember that milestone at a round table alongside Cecilia Bartolomé, a pioneer Spanish filmmaker whose feature ¡Vámonos, Bárbara! (1978) was screened as part of the cycle, and Vivian Ostrovsky.

Born in New York in 1945, Ostrovsky is an experimental director and distributor. In the 70s she founded the alternative distribution company for feminist films, Ciné-Femmes International, together with Rosine Grange, an initiative which went on to become a crucial reference for the circulation of experimental and militant films made by women. Both closely collaborated with the Donostia Women's Assembly, attended the cycle in 1978 and enabled the arrival of several films and filmmakers.

The second afternoon session (19:00) will open with the screening of Expediente, an experimental 16-minute work which won the Golden Shell for best short film at the San Sebastian Festival in 1977. Directed by Carlos Rodríguez Sanz and Manuel Coronado, the film is a montage of fragments of paintings by the group of anti-Franco artists, Equipo Crónica. The piece is dedicated to the memory of the last people executed by the Dictatorship, although it proposes a broader reflection on the effects of repression under Franco. Next, Luis López Carrasco and Raúl Liarte will offer a performative screening in response to Expediente. The creators from Murcia, whose works prompt a critical reflection on the memory of the Transition and the subsequent political transformation movements, will present the piece García/García, created from unseen materials related to the last anti-Franco political prisoner in the city of Cartagena in the 70s, and to the first person arrested for refusing to do their military service in Spain in the 90s.

On November 11, the first transfer of Festival archive material was made to the Filmoteca Vasca conservation premises, amounting to 926 boxes of general archives and all of the press material in paper format preserved since the event was founded until the 90s. Until now said material had been kept in storage facilities in Martutene, but it will gradually be stored, prepared and catalogued at the Filmoteca Vasca premises. Furthermore, in January 2020 a space will be fitted out at Tabakalera in which to examine, clean and restore the collections, thereby guaranteeing their conservation and conditions of access. The aim is that, from 2022, anyone wishing to consult the collections can do so in a detailed database with themed itineraries based on the lines of research developed in the project.

Furthermore, from December 7, the Festival website will include a section which will be periodically updated and will serve to shed light on a selection of archive content as well as on evolution of the research project. The first materials published will focus on the work of the so-called Comisión de Barrios y Pueblos which, from 1977, and until the mid-80s, was responsible for taking the Festival screenings to the neighbourhoods and municipalities of the Basque Country and Navarre. It will also focus on the difficulties experienced by the Festival when endeavouring to guarantee its international recognition in the years of the Transition. Finally, in the first half of 2020, the website will incorporate digital versions (in PDF format) of all of the daily newspapers and magazines brought out by the Festival prior to 2001, given that those published after that year are already available on the website. 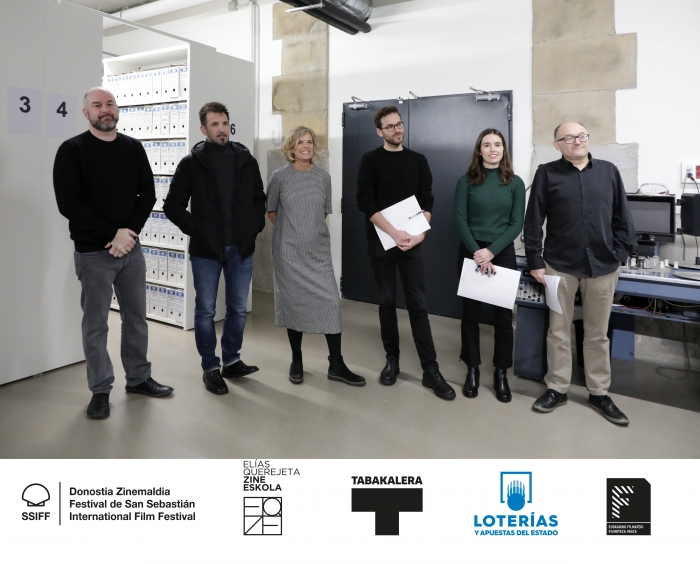 Download pictures in high resolution
For the first time, the San Sebastian Festival shares its documentary archive with the citizens