Log-in to My Festival | New user
My Festival
My Invoices
Virtual pressbox
• All films
Log-in details
Contact
CONTENT
You are in: Home > 2020. 68th Edition  > Festival Diary > “Cinema will never die”

The 68th San Sebastian Film Festival was officially opened last night at a gala in the Kursaal in which music and dance played a leading role with the concept of distance imposed by the coronavirus and the need to return to cinemas providing the thread running through the proceedings.

The director of the Festival, Jose Luis Rebordinos, stressed how film theatres are still the best place to see a film. “It’s time for all of us to return to the cinema”, he insisted before he introduced Thierry Frémaux, the director of the Cannes Festival, after reminding us that 17 of the films being screened at San Sebastián had been selected for the French festival, which had to be cancelled.

Frémaux explained how, “2020 marks 125 years since the Lumière Brothers invented the cinematograph and the film theatre. Today the threat looms over film theatres; the future is also on the platforms, but what the Lumière Brothers wanted was what you are all going to do here: watch a film on the big screen and share its emotions. Cinema will never die”.

The Gala also included the presentation of the Official Jury consisting of Marisa Fernández Armenteros, Joe Alwyn, Michel Franco and Lena Mossum and its chairman Luca Guadagnino. The Italian director said that in a year when we are all obliged to stay apart and isolate, there’s nothing better than to celebrate, “the collective and shared experience” of the cinema, which must “light up our imagination with daring, critical and unrestful visions”.

The gala concluded with a video message from Woody Allen in Central Park, New York,in which he apologised for not being able to come to San Sebastián, which he had really been looking forward to until the pandemic ruined everything. He hoped the audience would enjoy his new film: “I hope you like it as much as we liked living and shooting it in San Sebastian. See you when the plague’s over”.

This was followed by the appearance of the two leading actresses from Rifkin’s Festival, Gina Gershon and Elena Anaya, as well as its producer Jaume Roures, who introduced the film that was screened immediately after the opening ceremony. 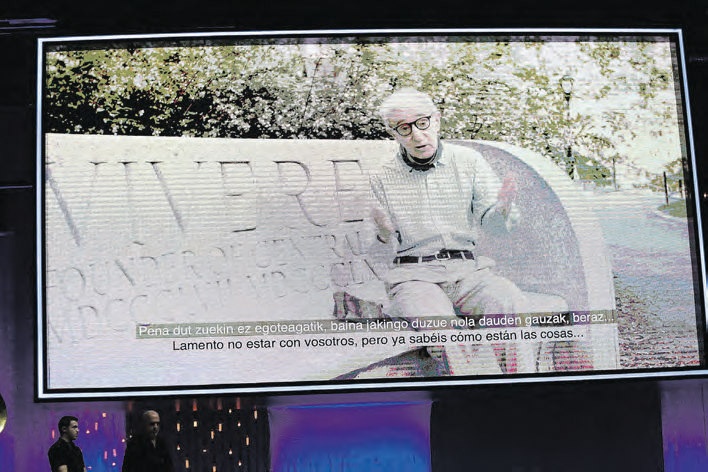