Log-in to My Festival | New user
My Festival
My Invoices
Virtual pressbox
• All films
Log-in details
Contact
CONTENT
You are in: Home > 2020. 68th Edition  > News > The Artium Museum in Vitoria-Gasteiz opens the exhibition on the 1977 Festival

Archive
2020. 68th Edition - 18-26 September
A Graphic Look
Donostia Award
Awards
Sections and films
Posters
Festival Diary
Photo day by day
Activities report
The Artium Museum in Vitoria-Gasteiz opens the exhibition on the 1977 Festival
Audiovisual materials, letters, photographs and documents, many of them unpublished, recreate an edition that represented a radical change in its history The Festival celebrated its 25th anniversary in 1977 and its management was transferred to San Sebastián for the first time The exhibition presents the film 'Expediente', winner of the Concha de Oro for best short film, restored and digitised by Elías Querejeta Zine Eskola
Tuesday, September 8th, 2020
Facebook Twitter Email
Send page by email
Print
Send page by email

The San Sebastián Festival, Elías Querejeta Zine Eskola film school (EQZE) and Artium, Basque Museum-Centre of Contemporary Art in Vitoria-Gasteiz present the exhibition The Festival Has Had 24 Editions: We Don’t Like It (Room A01, until 8 December 2020). The exhibition focuses on the 1977 San Sebastián Festival, the first that was held after transferring its management to the city of San Sebastián. The exhibition brings together a great deal of material from the Festival Archive, much of it unpublished, such as letters, documents, photographs and magazines. The project is linked as a case study to the Artium Museum Collection exhibition entitled Zeru bat, hamaika bide. Prácticas artísticas en el País Vasco entre 1977 y 2002 [Zeru Bat, Hamaika Bide: Artistic Practices in the Basque Country in the Period 1977-2002] and is part of the project Zinemaldia 70: todas las historias posibles [Zinemaldia 70: all possible stories], promoted by the Festival and EQZE.

When the audience of the 25th San Sebastián Festival opened the first issue of its official magazine on 10 September 1977, they found neither a celebration of the silver jubilee nor the usual protocol formulas, but instead an unusual statement that was also written for the first time in Basque: “The Festival has had 24 editions: we don’t like it”. A promise of radical change and a confrontation with its own history. For the first time, the Festival was no longer managed from Madrid but by a local committee that included representatives from artists’ associations, film clubs and neighbourhood associations. San Sebastián ’77 was an attempt to recover the time stolen by Franco’s regime: the programme paid homage to the victims of the dictatorship and to exiled and censored filmmakers, extended the screenings and talks to neighbourhoods and villages and explicitly backed the demands of the Basque people. In short, it claimed to be a platform from which to imagine a new democratic, popular festival.

As the exhibition’s curator, Pablo La Parra Pérez, head of the research department of Elías Querejeta Zine Eskola, explains: “The San Sebastián Festival was 25 years old in 1977, but more than an anniversary, the 1977 edition was a space for struggle: the first festival managed by the city became a platform for political demands from which to imagine a new democratic festival”. “Based on archive materials located within the framework of the research project Zinemaldia 70: todas las historias posibles, the exhibition explores this year of radical change,” he adds.

The exhibition presents the film Expediente by Carlos Rodríguez Sanz and Manuel Coronado, winner of the Concha de Oro for the best short film at the 1977 Festival, for the first time since its restoration and digitisation. This 15-minute, 16-mm film concerns a painting by the Equipo Crónica team (comprising Rafael Solbes and Manuel Valdés) that simultaneously invites us to reflect on the effects of Franco’s repression. The painting Leer a Daumier [Reading Daumier] by Equipo Crónica (1975), part of the Artium Museum Collection, is displayed on the wall opposite to which the film is screened.

Among the many documents that can be seen in the exhibition from the Festival Archive, there are letters and statements of support for the Festival; original covers and major articles from the Festival’s official magazine; a poster of the film Viridiana, repressed by the Franco dictatorship and whose director, Luis Buñuel, was honoured in this edition of the Festival; newspaper clippings of the time; a comic signed by Juan Carlos Eguillor, and many photographs featuring popular figures from the world of cinema, from Harrison Ford and Carrie Fisher to Elías Querejeta and the aforementioned Luis Buñuel.

The composition of the international jury of this edition has also gone down in history, comprising such figures as Eduardo Chillida, filmmakers Luis Alcoriza and Ricardo Muñoz Suay, critics Raymond Borde and Freddy Buache and actors Malcolm McDowell and Franco Nero. Additionally, its steering committee included Rafael Ruiz Balerdi, who also created the poster for this edition, and Nestor Basterretxea, among others.

The exhibition is based on the collective research conducted during the academic year 2018-2019 by the team of the project Zinemaldia 70: todas las historias posibles. Jointly organised by the San Sebastián Festival and Elías Querejeta Zine Eskola and sponsored by Spain’s National Lottery and Gambling Agency (Loterías y Apuestas del Estado), the project aims to recover, study and enhance the Festival’s historical archive, which has been preserved until today ever since it was set up in 1953. The aim of the project is to create a living, public archive that can trigger critical debate with contemporary creation and thought. 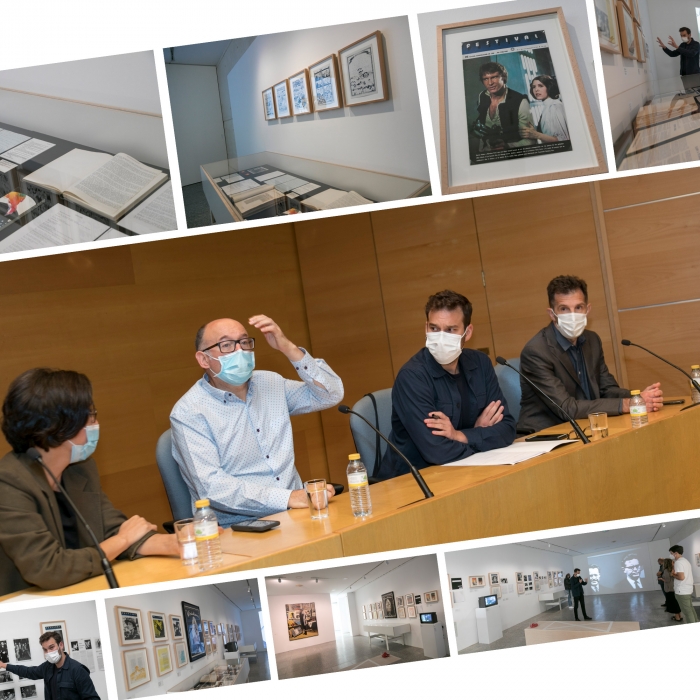