You are in: Home > 2021. 69th Edition  > News > The San Sebastián Festival and Elías Querejeta Zine Eskola are bringing together the Venice, Berlin and Vienna Festivals, and the Cannes Fortnight at Mugak

Archive
2021. 69th Edition - 17-25 September
A Graphic Look
Donostia Award
Awards
Jury Members
Sections and films
Posters
Festival Diary
Photo day by day
Activities report
The San Sebastián Festival and Elías Querejeta Zine Eskola are bringing together the Venice, Berlin and Vienna Festivals, and the Cannes Fortnight at Mugak
The event, which will take place on Thursday the 25th in the Institute of Architecture of the Basque Country, will analyse the spatial dimension of film festivals and its relationship with the cities they are held in
Tuesday, November 23rd, 2021
Facebook Twitter Email
Send page by email
Print
Send page by email

The San Sebastián Festival and Elías Querejeta Zine Eskola (EQZE) have organised a roundtable about Film festivals and urban transformations with the participation of the Venice, Berlin Festivals and the Viennale and the Cannes Director’s Fortnight as part of Mugak, the Basque International Architecture Biennial. The meeting, which will be held on Thursday, the 25th at 19:00, at the Institute of Architecture of the Basque Country, will bring together the director of Special projects at the Venice Festival, Arianna Laurenzi; the executive director of the Berlin Festival, Mariette Rissenbeek; the artistic director of the Viennale, Eva Sangiorgi; and the artistic director of the Cannes Directors’ Fortnight, Paolo Moretti, moderated by Pablo La Parra Pérez, the coordinator of the EQZE Research department and head of the Zinemaldia 70: all possible stories project.

Last year, the Research department at EQZE, in collaboration with the School of Architecture of the University of the Basque Country and the Observatory of Scenic Spaces research group at the Polytechnic University of Catalonia, launched the Architecture of Film project, in order to carry out theoretical and practical research on film as an architectural space and its relationship with the city. As far as the Architecture of Film project is concerned, the San Sebastián Festival is developing, through its Thought and Discussion area, a specific line of work that aims to provide innovative responses to the urban challenges that the international festival circuit faces. As a result, within the framework of the public programmes that the Architecture of Film project will be holding during Mugak, the San Sebastián Festival has organized this event, which will bring together international film festivals and architects, academics and film students to debate and exchange specialised knowledge about the spatial dimension of film festivals.

The conversation will delve into the urban histories of film festivals to learn how festivals have responded and adapted to periods of crisis and urban transformation throughout their history. Among the subjects that will be addressed are the different ways in which festivals  transform and are transformed by their urban surroundings; the recent and present effects of the pandemic; how film festivals are tackling the disappearance of commercial film theatres and traditional screening spaces in their urban surroundings; and the development of alternative spaces and architectural experiments that festivals have put into practice during the COVID crisis and beyond (open-air screenings, ephemeral architectures, etc.).

Admission is free until full seating is reached. There will be simultaneous translation via ZOOM. The attendees will have to bring their own phone with internet connection, headphones and the ZOOM app downloaded in their phone to enjoy this service.

Organised by the San Sebastian Festival and Elías Querejeta Zine Eskola, as part of Mugak: the Basque International Architecture Biennial 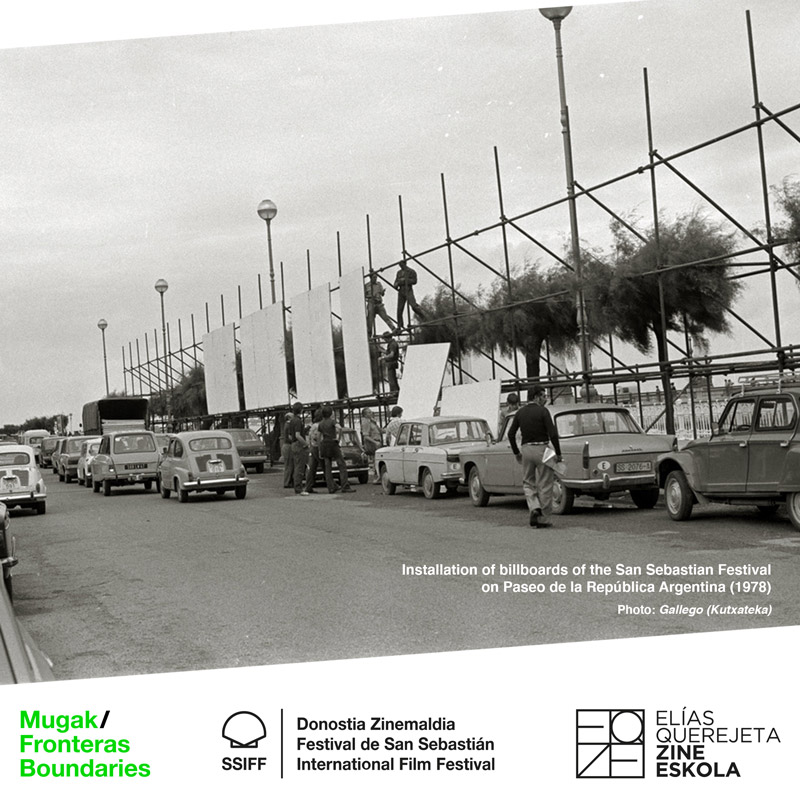