Archive
2021. 69th Edition - 17-25 September
A Graphic Look
Donostia Award
Awards
Sections and films
Posters
Festival Diary
Photo day by day
Activities report
70 years of San Sebastian Festival in the Tabakalera cinema
The new 'Zinemaldia 70' Nosferatu season will take a look at the Festival's history on its 70th anniversary, screening 40 films to have featured on its programme since 1953

The Zinemaldia + Plus seasons, the fifth edition of 'Cinema and Science' and the season dedicated to the German moviemaker Christian Petzold will kick off the programme for the year in January

The movie voucher and individual tickets for the 2022 screenings will be available for purchase from December 22 on the Tabakalera website and from the centre's Information Point
Friday, December 17th, 2021
Facebook Twitter Email
Send page by email
Print
Send page by email


Start of the Nosferatu season, 'Zinemaldia 70'

On January 5, a new Nosferatu season will kick off in Tabakalera, dedicated this time round to the San Sebastian Festival (1953-2022). It will kick off with the screening of Jacques Becker's film Casque d'Or (Golden Helmet, 1952), which screened at the 1st San Sebastian International Film Week (1953). Many years later, in 2016, the Festival dedicated its retrospective to Becker.

The Nosferatu season 'Zinemaldia 70', organised by Donostia Kultura, Filmoteca Vasca and the San Sebastian Festival, with the collaboration of Tabakalera and the Institut Valencià de Cultura-The Generalitat Valenciana Film Archive, will run from January to December 2022. Over these twelve months it will offer a look at the history of San Sebastian's Festival with the screening of some 40 films to have featured on its programme since 1953, mainly chosen from its official selections and those dedicated to first films.

The retrospective aims to give a first idea of the Festival's history in as varied a fashion as possible, including the filmmakers and movies to have marked the last 70 years of film history. Screening among others in these first three months are films by Douglas Sirk, Jean Cocteau, Howard Hawks, Volker Schlöndorff, Margarethe von Trotta, Ingmar Bergman and Josefina Molina.

The season will be accompanied by two books, one in Spanish and another in Basque, inspired in the Festival's history. The first one, Zinemaldia 1953-2022. Singularidades del Festival de Donostia / San Sebastian, no. 18 in the Nosferatu Collection, is coordinated by Quim Casas and will be published in January. The second one, written by Katixa Agirre, no. 10 in the Nosferatu Bilduma collection, will come out in late 2022.

The Festival all year round, Zinemaldia + Plus continues

For the second year running, San Sebastian Festival will programme a monthly proposal on the shared screen in the shape of the Zinemaldia + Plus season, featuring the work of filmmakers with some kind of connection to the competition or its programmes in support of emerging creation.

The first of the showings confirmed for 2022 is the one corresponding to the month of January, which will focus on Ocaña, retrat intermitent (Ocaña, an Intermittent Portrait, 1978), the film directed by Ventura Pons on the impossible-to-classify Andalusian artist José Pérez Ocaña. This screening is part of the exhibition A Festival in Transition. San Sebastian Festival in the years of change (1976-1985), which looks back at the changes brought about in the Festival as a result of the Transition and opened recently in the Kutxa Kultur Plaza on Tabakalera's fourth floor.

Other Zinemaldia + Plus screenings will be related to the winning works of Nest and to the Donostia Awards of the coming San Sebastian Festival, which will celebrate its 70th anniversary from 16-24 September 2022. Zinemaldia + Plus is part of Z365, a programme reflecting San Sebastian's essence as a festival not limited to the nine days of the edition, but which will continue throughout the year through different screenings and programmes.

Cinema and Science is back

The period from January to March 2022 will see the fifth edition of the Cinema and Science season, organised by the Filmoteca Vasca, the Donostia International Physics Center and San Sebastian Festival. The initiative will therefore lend continuity to its decided endeavour to convey cinema and scientific culture, by means of screenings, presentations and debates with the outstanding presence of prestigious scientists. From April to June the baton will be taken up by the Lumière Showingsseason, a unique opportunity to revisit movie classics brought to us by one of the reference institutions in the field: the Institut Lumière in Lyon. With the arrival of summer, jazz will take hold of the three Basque provinces. The Filmoteca Vasca will join the three Festival rendezvous on the Basque scene by organising the sixth edition of Jazzinema in July. To end the year, the last three months of the programme will have the protagonism of Basque moviemakers. Thus, the II Basque filmmakers season will display the talent of the Basque filmmakers to have made at least one feature film in their careers.

Once again Tabakalera's film programme focusses its annual seasons on two of contemporary cinema's big names: the German filmmaker Christian Petzold and director Claire Simon. In the last three months of the year, the programme will be rounded off with screenings coinciding with the exhibition relating art with the cinema programmed to run in Tabakalera's main exhibition gallery from July 8 in collaboration with the San Sebastian Festival.

Director Christian Petzold (Hilden, 1960) is part of German cinema's New Wave with Angela Schanelec (Tabakalera retrospective in 2019) and Thomas Arslan, and the second generation made up of Valeska Grisebach, Ulrich Köhler and Maren Ade. Petzold studied at the German Film and Television Academy in Berlin (DFFB), where one of his teachers was Harun Farocki, who went on to become his mentor and, later, his collaborator; many of Petzold's films are written by both of them. In 2012 he bagged the Silver Bear for Best Director at the Berlinale for his film Barbara. Until now he has directed nine features, some of them as part of trilogies. The first trilogy, Gespenster (ghosts in German) consists of his first feature film Die innere Sicherheit (2000), Gespenster (2005) and Yella (2007). His most famous trilogy focuses on the subject of love in repressive systems and its three parts are Barbara (2012), Phoenix (Official Selection, 2014) and Transit (2018). His latest feature, Undine, is also the first film in a new trilogy. Together with the complete Petzold retrospective, the Tabakalera season will host a talk by Volker Pantenburg, from the Harun Farocki Institut, who will take an in-depth look at the relationship between Petzold and Farocki, ending with screening of the adaptation of the book Transit, by Anna Seghers which, as done by Petzold, was also directed by Engström and Gerhard Theuring with the title Fluchtweg nach Marseille(Escape Route to Marseille, 1977).

From April to July the cinema audience will be able to enjoy a complete retrospective of the director Claire Simon, who will visit Tabakalera on May 28 to give a masterclass. The moviemaker presented her latest film Vous ne désirez que moi / I Want to Talk about Duras at the last edition of the San Sebastian Festival and, making the most of this starting point, Tabakalera will screen all of her films. Claire Simon (London, 1955) was born in the UK but spent her childhood in Var (France). She studied ethnology, Arabic, Berber and editing thanks to the Cinemathèque d'Alger. She taught herself how to make her first short films in the late 70s and her time at the Ateliers Varan was key; there she discovered Jean Rouch and direct cinema. In her films, Simon combines documentary and fictional film: in 1997 she directed Récréations (1997) in which she filmed a school playtime that earned her an important place in documentary cinema and that same year directed her first fiction feature, Sinon, oui (A Foreign Body). Mimi (2003), the film by Claire Simon that will be presented by the writer Katixa Agirre, and the Carte Blanche offered to Claire Simon, the film Amsterdam Global Village,by Johan van der Keuken (1996), will close the season.

In the last three months of the year the programme will tighten the bond between the cinema and art, dedicating its screenings to the moviemakers participating in the contemporary art exhibition to open its doors in Tabakalera's main exhibition gallery this summer.

Added to the above, the movie programme will be rounded off with the already familiar Cine Hablando seasons, where directors tell those present in the cinema about the process they follow in creating their films; Cartas Blancas; Desde el principio. Historias del cine feminista, which will be programmed simultaneously at the Artium museum; Banda Sonora Original; Kameleoiak Gara! (a film for families) and Historia permanente del cine. Finally, as in previous years, the Film Curating students of Elías Querejeta Zine Eskola will share their vision of cinema through a monthly program.

The new movie voucher will give its holder access, for a price of 120 euros, to 40 screenings from among all those programmed by the partner institutions of Tabakalera's shared screen in 2022: Donostia Kultura, Filmoteca Vasca, Elías Querejeta Zine Eskola, San Sebastian Festival and Tabakalera, with the exception of films programmed during the San Sebastian Festival in 2022. Those purchasing the voucher will also receive the publication in Spanish of the Nosferatu season Zinemaldia 70, dedicated to the Festival's history, or Kandelikara, by Harkaitz Cano, in Basque, on the moviemaker Luis Buñuel.

The voucher can be purchased from 22 December at 12:00, until 31 January 2022 at 12:00, both on the Tabakalera website and at the centre's Information Point. Also available from the same places are the individual tickets for screenings in the month of January which, with the new year, have an increased cost of 4 euros.

The voucher can use used from 1 January 2022 until 31 December 2022 (both inclusive). Tickets for the programme of the coming year can be purchased and all formalities related to the voucher can be carried out both on the Tabakalera website and at the centre's Information Point: purchasing the voucher, sending it to another person as a gift, purchasing tickets for films with the voucher discount or consulting the remaining balance.

All of the information related to the 2022 cinema voucher and the screenings planned in January can be consulted on the Tabakalera website. 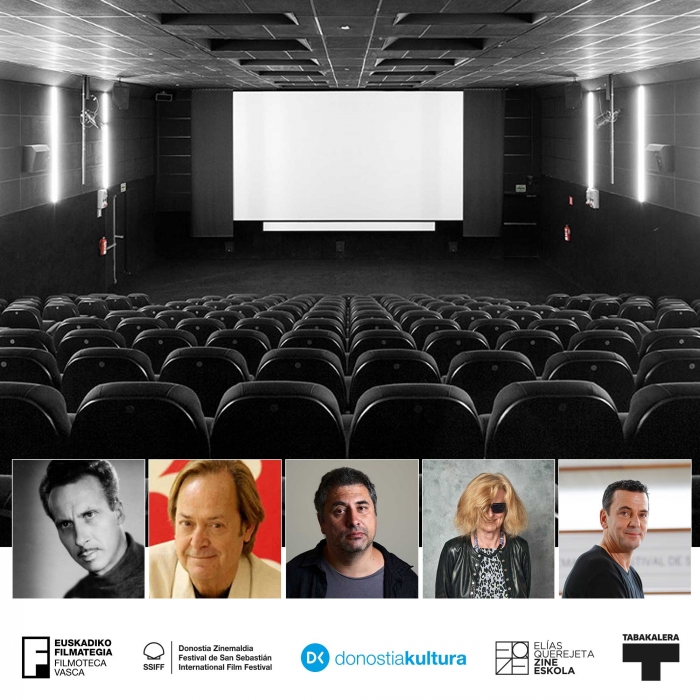