‘Imagine a Film Festival’, featuring videos running for 150 minutes plus on some twenty screens, can be visited until 24 September

Today the San Sebastian Festival, whose 70th edition will run from 16-24 September, opened an extensive exhibition to celebrate its anniversary at its hub, Tabakalera Contemporary Centre for International Culture. Co-organised with Tabakalera in collaboration with the San Sebastian City Council and Gipuzkoa Provincial Council, Imagine a Film Festival is designed as a homage to the movie industry, to the media, the film theatres, the city itself and, of course, to the members of the public who flock to the cinemas year after year.

From today, and until 24 September, the display running on several audiovisual installations located in Tabakalera’s different public spaces will show the main highlights of the Festival’s history, presented “as a collective work of which we are all the stars”, according to the concept of Carlos Rodríguez and Asun Lasarte from Morgancrea, the production company responsible for curating an exhibition featuring hundreds of videos running for a total of more than 150 minutes.

Participating in today’s presentation alongside the exhibition designers were the Festival Director, José Luis Rebordinos, and the Director of Tabakalera, Edurne Ormazabal, together with the Mayor of San Sebastian, Eneko Goia, and the Deputy General of Gipuzkoa, Markel Olano, on behalf of the collaborating institutions.

An outstanding feature of the Festival since its earliest days, the red carpet will act as the guide to an exhibition which can be accessed either from the main door on the Cigarreras Square or from the lower entrance in the Plaza Nestor Basterretxea. More than 200 metres of carpet have been used which, at times suspended above the heads of those visiting the exhibition, will mark out a route around the different parts of Tabakalera’s public space that can be followed in different ways.

Coming into the ground floor from Nestor Basterretxea Square, the first installation in the visit has eight screens dedicated to the Public. On the one hand, the show suggests following the ambience of the red carpet and the cinemas at different periods of the Festival and on the other, exhibiting the selection of photographs expressly sent in by the locals in response to a call from the event: snapshots and selfies identified with names and surnames and taken in their day by Festival aficionados alongside different stars and personalities.

The stairs leading to the first floor will bring you out at the Media installation dedicated to the role of those who have contributed to spreading news of the Festival worldwide and to preserving its memory thanks to their articles, interviews, photographs and audiovisuals. Like a huge book or newspaper, two large-sized vertical screens reproduce a selection of images, headlines and statements by some of the most interesting personalities to have visited San Sebastian in these 70 years.

Continuing on the first floor, a long corridor has been turned into a Photocall, presided over by a giant screen of 24 x 4 metres showing images screened simultaneously by five projectors. This is a magical space inviting visitors to walk along the red carpet while enjoying shots of more than 800 celebrities who have visited the Festival in its seven decades. The content of this time tunnel are shown at a certain distance and chronologically, meaning that the public can simultaneously view moving images of Gloria Swanson, Kirk Douglas, Audrey Hepburn, Harrison Ford, Bette Davis, Robin Wililams and Brad Pitt, among many others.

Finally, at the end of the corridor, a curtain leads into the last room, going by the name of Zinea and taking the shape of an enormous film theatre where visitors can recall some of the most iconic moments in the Festival’s history on a series of synchronised screens.

On one hand, to the left, are three large screens randomly displaying unforgettable moments: from the crowds who gathered to welcome Sophia Loren, Liz Taylor, Bette Davis, Denzel Washington and Bradley Cooper, to John Travolta taking a stroll on the Concha, the premieres of Star Wars and The Mask of Zorro, or Penélope Cruz’s surprise before receiving her Donostia Award from Bono (U2).

On the other, two cubes suspended in the middle of the room make a nod to Rafael Moneo’s Kursaal, displaying on their different sides images related to eight themes including the city’s cinemas, the Festival juries, their awards, the organisation and new talents.

Finally, two screenings will show the evolution experienced by the concha shell, the event’s main graphic trademark, together with an animation of the official posters corresponding to these 70 editions and a media library on two tactile screens enabling visitors to browse the Festival’s history, discovering or remembering filmed reports, interviews, awards ceremonies, celebrities and movies.

Workshops for children, guided tours and a competition

A series of workshops have been organised on the subject of the exhibition for children (aged from 3 to 6 and 7 to 11 years). The workshops will take place on Wednesday and Thursday mornings and Saturday afternoons. There will also be guided tours for the adult public on Tuesday afternoons and Sunday mornings. All those interested in these activities, which are free of charge, can register to participate on the Festival and Tabakalera websites. Those who visit the exhibition can also participate in a contest of questions related to the exhibition content. Tickets for the Festival’s 70th edition and merchandising articles will be raffled amongst the correct answers.

As well as collaborating with the organisation of Imagine a Film Festival, Tabakalera will participate in the 70th anniversary celebrations with another exhibition, Vive le cinéma!, scheduled to open its doors on Saturday July 9. It will consist of art installations by four international moviemakers: Jia Zhang-ke, Lemohang Jeremiah Mosese, Isaki Lacuesta and Dea Kulumbegashvili, the last two winners of three Golden Shells. 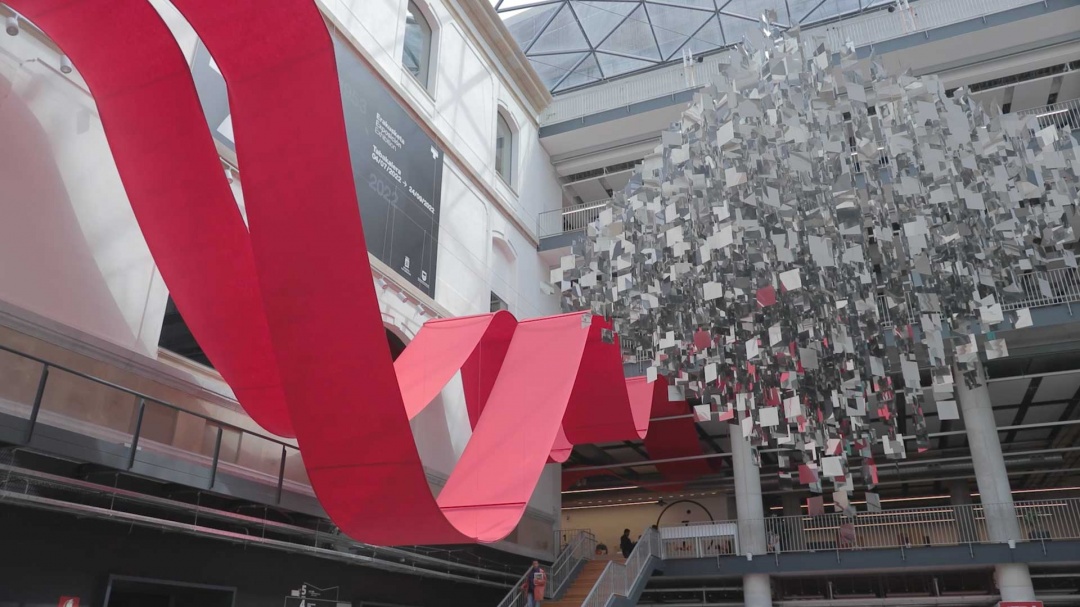