You are in: Home > 2014. 62nd Edition  > News > The 62nd San Sebastian Festival will dedicate a retrospective to the filmmaker Dorothy Arzner

Dorothy Arzner (1897-1979) was one of a kind in the history of American cinema, the only woman to carve out a professional career as a director in Hollywood’s Golden Age. In its 62nd edition, the San Sebastian Festival pays homage to the work of Arzner, today considered a pioneer in women’s incorporation to the film industry, proclaimed as a filmmaker of strong style and personality for which she earned undeniable prestige within the Hollywood studio system.

Born in San Francisco but raised in Los Angeles, Dorothy Arzner’s parents ran a café popular with the famous actors and movie directors of the time, including Charles Chaplin, William S. Hart and Erich von Stroheim. Having obtained a degree at the University of Southern Carolina and after a stint as an ambulance driver in World War I, Arzner began a career in the world of journalism. However, introduction by a mutual friend to the director William C. DeMille (brother of the famous Cecil B. DeMille) was to forever change the direction of her life: following a visit to a film studio, she decided to become a film director. Her first work in the film industry was as a stenographer at the Players-Lasky studios (later to become Paramount), transcribing film scripts. Her skills and strong nature opened the way to works of greater responsibility: script writer, script girl and, finally, editor. It was there in the editing room that Arzner earned her excellent reputation in the Hollywood movie industry, working on 52 films and assiduously collaborating with the filmmaker, James Cruze. In the famous motion picture starring Rudolph Valentino, Blood and Sand (1922), apart from her brilliant editing work, Arzner helmed the second unit crew for the bull-fighting scenes. She also worked as a script writer on some of Cruze’s films.

Arzner pressed Paramount to let her direct a film, threatening the studio bosses with the acceptance of an offer from their rivals at Columbia. Finally, she made her directorial debut on Fashions for Women (1927), and the following year became the first woman ever to direct a talkie, Manhattan Cocktail (1928). Arzner went on to helm another 15 films in the 30s and early 40s, working with Hollywood stars like Clara Bow, Katharine Hepburn, Fredric March, Rosalind Russell, Claudette Colbert, Maureen O'Hara and Joan Crawford in comedies and dramas powerfully focussed on women characters: The Wild Party (1929), Anybody's Woman (1930), Sarah and Son (1930), Honor Among Lovers (1931), Working Girls (1931), Merrily We Go to Hell (1932), Christopher Strong (1933), Nana (1934), Craig's Wife (1936) and The Bride Wore Red (1937).

In 1933 she became the first woman member of the Directors Guild of America and indeed remained its only female associate for several decades. She also went down in history as the inventor of the first boom mike for having used a microphone attached to a fishing rod when filming the early talkies.

Although she gradually fell from prominence, Arzner’s career was championed in the 60s by the feminist movements and she received several tributes, including one by the Directors Guild of America in 1975. Today her filmography is not only newly appreciated as an extremely unusual exception in the history of American film, but also for its intrinsic values. Arzner left her mark through a series of movies of refined visual style that questioned the traditional sexual roles of the time and the part played by woman in society or which, according to certain critics, introduced veiled lesbian undertones to the rigid Hollywood structure of the moment.

The retrospective dedicated by the San Sebastian Festival to Dorothy Arzner will be organised in collaboration with Filmoteca Española. The cycle will be complemented with a publication on her figure and work. 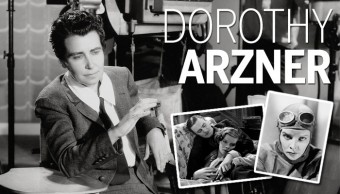