You are in: Home > 2014. 62nd Edition  > News > 15 projects in development from 14 countries will participate in the III Europe-Latin America Co-production Forum

In addition, and as part of the Festival's collaboration with the Ibermedia Programme, a project selected in the Workshop to develop film projects from Central America and the Caribbean will also participate in the Co-Production Forum.

The Europe-Latin America Co-Production Forum is fostered by the Basque Government Department of Economic Development and Competitiveness and the Ministry of Industry, Energy and Tourism.

As in previous editions, the final selection includes projects by directors and producers of recognised prestige alongside others by new directors and recently created production companies. Nine of the seventeen projects presented in 2012 have been completed, while three of the sixteen presented in 2013 have been filmed, and shooting is expected to start on another six in the coming months.

The Forum will run over three days to coincide with Films in Progress, dates on which San Sebastián will become a major meeting point for the audiovisual industry.

During these three days, those responsible for the projects will work to a busy meeting agenda with industry professionals from across the world. Their aim by attending the Forum is to make contact with potential co-producers, financial partners and sales agents in order to complete their funding and ensure their international production and distribution. In 2013, 461 one-to-one meetings were organised between project representatives and industry professionals, a remarkable increase with regard to the 365 meetings held in 2012.

For the second year running, the EGEDA Award for Best Project at the Europe-Latin America Co-production Forum 2014 will be presented. The Award comes with a cash prize of €10,000 and is sponsored by EGEDA, the Audiovisual Producer's Rights Management Association.

By way of a complement to the San Sebastian Forum, and thanks to collaboration with the Marché du Film-Festival de Cannes and Argentina´s INCAA (Instituto Nacional de Cine y Artes Audiovisuales), some of these projects will have the opportunity to continue progressing internationally with participation in the Ventana Sur market in Argentina and in the next edition of the Cannes Producers Network. These events will help to decisively boost their international promotion.

As a new feature this year, the Festival will organise a Focus on Canada with Telefilm Canada. A delegation of 12 Canadian producers will come to San Sebastián to experience the Festival in person, make professional contacts and participate in the Co-production Forum and the other Industry Club activities. 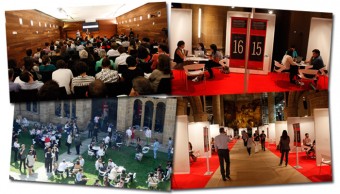