Our Newsflashes provide daily updates on the media repercussion enjoyed by the films selected for the different Festival sections and the list of professional activities scheduled for the following day. Newsflashes are sent out to all industry professionals accredited.

“Intelligence, human knowledge, irony and laughter with two exemplary actors. (…) I left the cinema with a much-appreciated smile on my face. I suspect the same thing will happen to the majority of viewers” Carlos Boyero, EL PAÍS

“Ricardo Darín and Mercedes Morán together are like a philharmonic orchestra, (…) the textual elements of the film are exceptional, magnificent. The actors’ dialogues hit the mark every time” Oti Rodríguez Marchante, ABC

“Simply monumental. (…) As physical as it is subtle. As delicate as it is premature. As tumultuous as it is intimate” Begoña del Teso, EL DIARIO VASCO 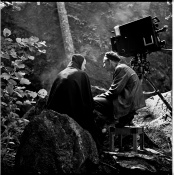 “One of the most honest and overflowing portraits of a film artist that I can remember seeing (…) it captures Bergman as the tender and prickly, effusive and demon-driven, tyrannical and half-crazy celebrity-genius he was” Owen Gleiberman, VARIETY

“Vibrant and implacable, staying true to the essence of the plot, this outstanding feature-length animation succeeds in capturing the tension, cruelty and longing which arise along each stretch of a meticulously-described journey” Koldo Landaluze, GARA

“One of the most interesting films of the year (…) Vibrant and dense, it moves along at a terrible and sometimes abrupt pace. The story is never sweetened and the film maintains the rigour of a journalistic documentary and the power of a carefully-put-together animation, somehow managing—almost miraculously­—to be spectacular, emotive and reflective at the same time” Mikel G.Gurpegui, EL DIARIO VASCO

“A deeply respectful, artful and compassionate eye outward, to the struggles of others, and finding such empathy there that the film amounts to a heartfelt statement of solidarity” Jessica Kiang, VARIETY