The Crossover Festival will premiere El Inmortal, produced by Movistar+, attended by several members of its team headed by Jon Kortajarena, and We Own This City, by HBO Max, David Simon’s latest creation.

The discussions at this edition will address issues such as the relationship between platforms and minority languages, the presence of science and humour in series and how addictions are represented.

The Crossover Festival recovers the table-talk dinners attended this time round by Leticia Dolera and Manuel Burque. The guests will informally chat about series as a means of expression for creators.

The Provincial Council of Gipuzkoa’s Department of Culture, in collaboration with the Kultur Factory Agency, bring the fifth edition of the Crossover Festival. The Culture of Series, taking place this edition in San Sebastian from 25-30 April. The Crossover Festival, which has its headquarters at the Koldo Mitxelena Kulturunea and Tabakalera, will follow its usual outline with the premiere of series, discussions and presentations.

Premiere of El Inmortal with part of the artistic team

The Crossover Festival kicks off the year strongly with a Spoken Series event open to the general public on the creation process and intra-history of the series Vota Juan – Vamos Juan – Venga Juan with the directors and screenwriters Diego San José and Víctor García León. Furthermore, during the Crossover Festival and around the 2deo Serieak project, other activities will be organised for professionals, not open to the public, to support the development of series, in which the showrunner Aitor Gabilondo, the screenwriter Laura Sarmiento and the producer Xabier Berzosa will tutor the projects selected this year: Agur, terrorista, by Lander Castro and Igor García; Anomaly, by Ana Urquijo Fabeiro, and Eneko, by Asier Urbieta San Martin.

Monday 25 will also see one of the edition’s biggest moments with the exclusive premiere of El Inmortal, a crime drama produced by Movistar+ freshly arrived from competing at Canneseries. Several members of its artistic team, headed by Jon Kortajarena, will be here in San Sebastian to present the series, accompanied by the journalist Mariola Cubells, head of original production at Movistar+ Domingo Corral and the series creator, José Manuel Lorenzo.

Scheduled for Tuesday 26 is the discussion “David Simon: fuck the average viewer?”, with Paloma Rando and David Trueba, moderated by Isabel Vázquez , who will look at the creative universe of David Simon, known as the king of the showrunners and author of The Wire, cited by many critics as the greatest TV show ever made. The discussion will be followed by the premiere of the first episode of We Own the City (HBO Max), his latest creation.

La novia gitana, from the book to the screen

On Wednesday 27, at 20:00 in the Koldo Mitxelena Kulturunea another of the Festival’s main courses will be served up: the presentation, with exclusive first images of Atresmedia’s adaptation of La novia gitana, the novel by the award-winning Carmen Mola, the pseudonym providing a front for Agustín Martínez, Jorge Díaz and Antonio Mercero. The latter will join the screenwriterJosé Rodriguez to present the project, accompanied by Montse García (Fiction Director at Atresmedia TV), Jordi Frades (Director of Diagonal TV) and Tomás Silberman (Head of Fiction Development for VIS Spain).

On Wednesday 27 at 18:30 an interesting debate will take place on the relationship between platforms and minority languages. Here the director Koldo Almandoz, the producer Marian Fernández and the journalist Urtzi Urkizu will be moderated by Gaizka Izagirre, also a journalist.

The debate on Thursday 28, entitled “Science and fiction: science in series”, will analyse the relationship between science and serial fiction. The participants will be the DIPC physicist and researcher Aitzol García-Etxarri, the mathematician and presenter of the programme Órbita Laika Eduardo Saénz de Cabezón and the physicist and communicator of the Quantum Fracture channel José Luis Crespo (the channel has almost 3 million subscribers and its videos have more than 200 million views).

Thursday will also see the premiere of the first episode of Magpie Murders (AXN), adaptation of the best-selling series of the same name by Anthony Horowitz, one of the most exciting thriller writers. The premiere will be presented by Xabier Gutiérrez, outstanding chef and writer and one of the foremost cultivators of the genre known as foodie noir.

On Friday 29 the focus of the debate will turn towards addictions. The producer and screenwriter Aitor Gabilondo and the director and author of the book Yo, adicto Javier Giner will look at the keys to the relationship between fictions and addictions, moderated by the critic Alberto Rey.

The exclusive premiere of The Palace (Der Palast), in collaboration with the COSMO channel, will be the next activity of the day. This fascinating suspense drama is set in the GDR immediately before the fall of the Berlin Wall. The premiere will be presented by the critic, Lorenzo Mejino.

Friday will end with a very special activity. Crossover recovers its format combining dinner and conversation on the subject of series after being put on hold by the pandemic. The title will be Series à la carte and the dinner will have two very special guests: Leticia Dolera and Manuel Burque, creators of the series Vida perfecta, who will talk about whether series are currently the most interesting field for artists and professionals from different areas.

Dolera and Burque will also talk to us about their influences and their favourite series, and about what it means to work in the audiovisual world. The chat, moderated by Maitena Salinas, will take place over a cocktail-dinner in Convent Garden’s Salón inglés.

On Saturday 30 the Festival will round off this 5th edition with an intense day in Tabakalera’s Z Room. The first activity, at 12:00, will be the discussion “Pantaila txiki, umore handi” with the multi-faceted Mikel Pagadi and Amancay Gaztañaga, moderated by Leire Arrojería. In the afternoon, at 18:00, it will be the turn of Travelling Series Live, a journey through the parts of Gipuzkoa providing the location for the shooting of major series including Game of Thrones, El Internado and Patria. Here Lorenzo Mejino will chat to the popular presenter Julian Iantzi.

At 19:00 the baton will be taken up by “Harvest of 22”, a look at the season’s most interesting series, with two essential critics: Borja Crespo and Marina Such, moderated by Enric Albero.

And, as in previous editions, the Crossover Festival will end with its usual Battle of the Series. This time round, two icons of cool suspense will lock horns: Twin Peaks vs The X-Files. Two mythical series from the 90s, perfect contenders for a great battle accompanied by Enric Albero, Borja Crespo, Gaizka Izagirre and Marina Such, moderated by Maitena Salinas.

Access to all of the activities is ‘free while places last,’ with the exception of ‘Spoken series’ and the premiere of ‘El Inmortal,’ both of which will require a free invitation, and ‘Series à la carte’ which has a paying cocktail-dinner. Tickets and invitations are available on the Festival website.

The commitment of Crossover and its network of collaborators

At this edition, Crossover continues to analyse the culture of series from different angles, always intended for a wide-ranging audience, combining fun and discussion and aiming to provide a showcase for the productions of the different audiovisual sector platforms.

The Crossover Festival enjoys the collaboration of the San Sebastian Festival and Tabakalera International Centre for Contemporary Culture, and has the backing of important allies, such as San Sebastian Turismo. In addition this year, it also collaborates with the 2deo audiovisual lab through Tabakalera’s 2deo Serieak programme for the development of series projects.

This commitment to films and series by the Koldo Mitxelena Kulturunea joins the actions to support, promote and communicate audiovisual projects developed in this field by the Provincial Council of Gipuzkoa’s Department of Culture: from creation of the Elías Querejeta Zine Eskola to grants for enrolment in said school, including the Lanabesa subsidies ―which have backed more than 70 long-term audiovisual projects since 2017― and entry of the Provincial Council of Gipuzkoa to the San Sebastian-Gipuzkoa Film Commission. 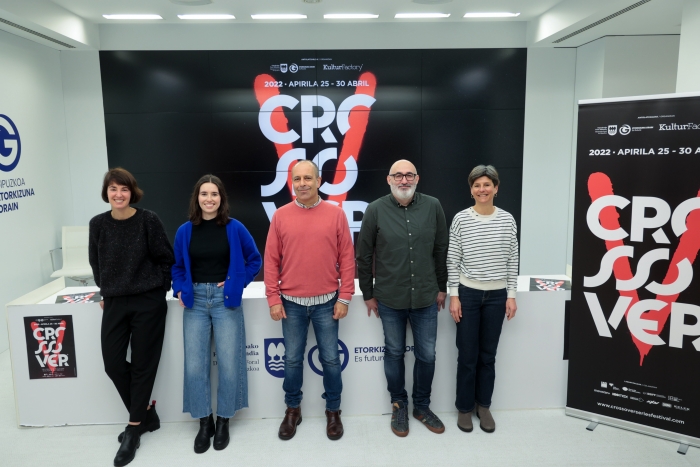