Laura Mora’s film Los reyes del mundo / The Kings of the World, a Colombian co-production with Luxembourg, France, Mexico and Norway, bagged the Golden Shell at San Sebastian Festival’s 70th edition. The official jury also decided to honour Genki Kawamura with the Silver Shell for Best Director for Hyakka / A Hundred Flowers (Japan), while the Best Screenplay Award went to Dong Yun Zhou and Wang Chao for their work on the latter’s movie, Kong Xiu / A Woman (China).

Carla Quílez and Paul Kircher landed the Silver Shell ex-aequo for Best Leading Performance in Pilar Palomero’s La Maternal (Spain), and Christophe Honoré’s Le lycéen / Winter Boy (France), respectively, while Renata Lerman forged ahead to win Best Supporting Performance for Diego Lerman’s El suplente / The Substitute (Argentina-Spain-Italy-Mexico-France). Manuel Abramovich, the director of Pornomelancolía (Argentina-France-Brazil-Mexico), carried off the Best Cinematography Award for his work on this film, while the Special Jury Prize went to Runner, by the first-timer Marian Mathias (USA-Germany-France), “for the ambition of its narrative engagement, for its originality and for the intensity sensed in this first work”.

This is the third year running that a film helmed by a woman has landed the Official Selection’s top prize after Beginning (Dea Kulumbegashvili, 2020) and Crai nou / Blue Moon (Alina Grigore, 2021), and the Golden Shell went to a Colombian production for the first time in the Festival’s seven decades. The movie in question is the second by its director, Laura Mora (Medellín, 1981), whose debut, Matar a Jesús (2017), received a Kutxabank-New Directors Award special mention.

Both the Jury Prize and the Golden Shell for Best Director went to two debut movies, Runner and Hyakka / A Hundred Flowers, respectively. The latter of the two is the work of Genki Kawamura, producer of essential titles in the field of contemporary Japanese animation.

The Official Jury giving these awards was presided over by the producer Matías Mosteirín, who was accompanied by the jury members Antoinette Boulat, Tea Lindeburg, Rosa Montero, Lemohang Jeremiah Mosese and Hlynur Pálmason.

Tonight the Kursaal hosted the closing gala of the Festival’s 70th edition, at which other official awards were also presented.

Fifi / Spare Keys (France), co-directed by Jeanne Aslan and Paul Saintillan, landed the Kutxabank-New Directors Award, where another debut, Pokhar ke dunu para / On Either Sides of The Pond (India), by Parth Saurabh, earned a special mention. Tengo sueños eléctricos (Belgium-France-Costa Rica), the debut movie from Valentina Maurel, won the Horizontes Award after harvesting Best Director, Best Actress and Best Actor at the Locarno Festival. For its part, the Zabaltegi-Tabakalera Award was for Hlynur Pálmason’s Godland (Denmark-Iceland-France-Sweden), previously a participant in Un Certain Regard at Cannes.

Added to these, the winner of the Irizar Basque Film Award was Suro (Spain), Mikel Gurrea’s debut feature and participant in the Official Selection, while its special mention went to A los libros y a las mujeres canto / To Books and Women I Sing (Spain), the movie by María Elorza selected for New Directors. Suro also was also acclaimed with the FIPRESCI Grand Prix.

On the other hand, the City of Donostia / Sebastian Award, decided by the audience watching films in the Perlak section, went to Argentina, 1985 (Argentina-USA), the film by Santiago Mitre, recipient of the FIPRESCI Award at the Venice Mostra, while the Audience Award for Best European Film was carried off by As bestas / The Beasts (Spain), with which Rodrigo Sorogoyen participated in the Cannes Première section.

The gala was followed by the world premiere of Marlowe, the latest movie by Neil Jordan, who was in San Sebastian together with two of its actors, Liam Neeson and Diane Kruger. 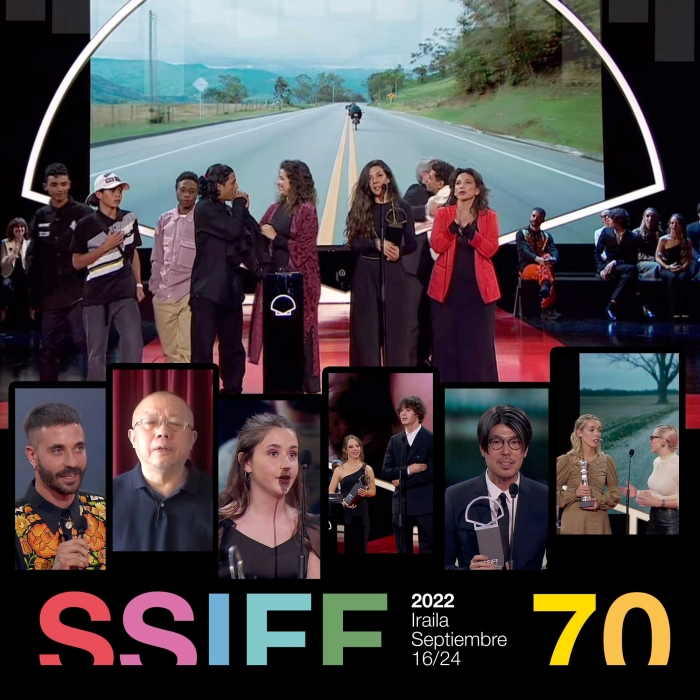