The research on the figure of the filmmaker Antxon Eceiza, the carte blanche given to the programmer Paolo Moretti and the results of the Z70: all possible stories project provide the inspiration for the final three sessions in 2022 of Zinemaldia + Plus, the annual focus with which the San Sebastián Festival takes part each month in the programming on the shared public cinema screen at Tabakalera, organised by the Z365 area, the all-year-round festival.

The event on the 22nd of October will focus on the filmmaker, Antxon Eceiza. At 18:00, the deputy director of the San Sebastián Festival and author of the thesis Entre Antonio y Antxon Eceiza. Cine y política, Maialen Beloki, will be presenting her book, Antxon Eceiza. Vidas, tiempos, obras, published by Shangrila, accompanied by the senior lecturer in Audio-visual Communication Santos Zunzunegui. At 19:00 the third issue of the academic journal, ZINE, devoted to Antxon Eceiza’s bio-filmography, will be officially presented. Maialen Beloki and the researcher, Beñat Sarasola, whose writings have been included in this issue, will be taking part in the bilingual presentation. Afterwards the work by the San Sebastián director Ke arteko egunak (1989), the first film in Basque that competed in the Official Selection at the Festival, will be screened with Spanish subtitles.

On the 26th of November, Zinemaldia + Plus will premiere the film Re Granchio (2021), by the Italian filmmakers Alessio Rigo de Righi and Matteo Zoppis. The film forms part of the carte blanche framework that the Festival has offered to film festival directors and programmers, that began last year with Vanja Kaludjercic, the director of the Rotterdam Festival. Re Granchio was shown in the Directors’ Fortnight at Cannes and has been chosen by its former artistic director, Paolo Moretti, who formed part of the jury of the New Directors section at the San Sebastián Festival this year.

The regular public programme organised by the Z70: all possible stories project will this year include the completion of the initial conservation and research phase of the Festival archive. On the 15th of December the new web page will be presented. It will contain the digital collections of the archive consisting of all the issues of the Zinemaldia magazine, published since 1954, more than 2,000 photographs from the Festival’s own collections and from the Kutxateka collection, as well as the complete collection of posters that have been preserved, with more than 200 new copies. They will also be presenting the conclusions of the work carried out in the last four years, and will be screening the short film ¿Cuáles son nuestros años? (2021) by Clara Rus, made when she was a student from the first graduating class at Elías Querejeta Zine Eskola (EQZE) when the archive was starting to take its first steps.

The three sessions will be held in the cinema 1 at Tabakalera. Access is free to all the activities, except for the screenings of Ke arteko egunak and Re Granchio, for which tickets can be purchased at the information desk at Tabakalera and on the Tabakalera web page for 4 euros. 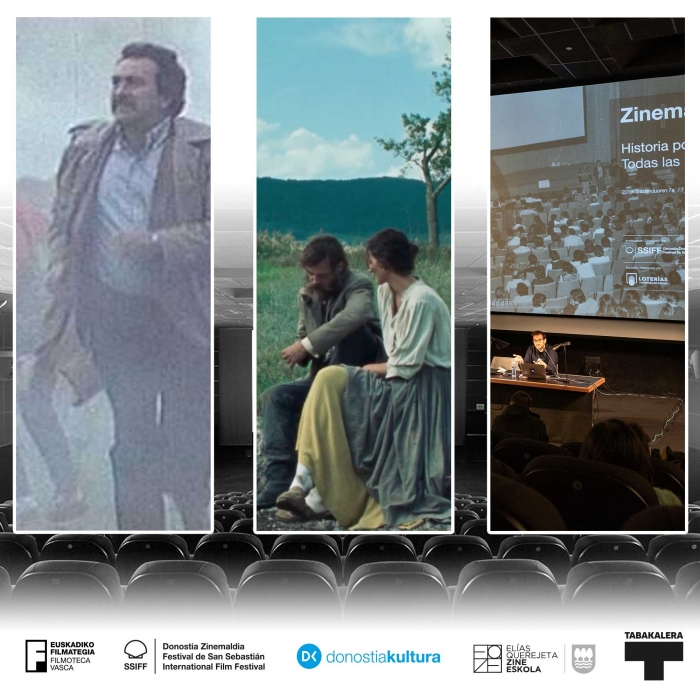