You are in: Home > 2014. 62nd Edition  > News > The San Sebastian Festival, IBAIA and the FIPA in Biarritz strengthen their relations in the framework of the activities developed at both events with a view to boosting the audiovisual industry

This morning, opening date of the 27th edition of the Biarritz International Festival of Audiovisual Programs, the San Sebastian Festival, IBAIA (Association of Independent Audiovisual Production Companies of the Basque Country) and the FIPA itself formalised the signing of a collaboration agreement.

The signing of this Agreement was attended by the highest representatives of the three bodies: Francois Sauvagnargues (Delegate General of FIPA), José Luis Rebordinos (Director of the San Sebastian Festival) and Joxe Portela (President of IBAIA). This Agreement represents an important step forward as regards the undertaking to collaborate launched in 2007 with the signing of a first agreement that set the foundations for the consolidation of this new relationship.

Specifically, both IBAIA and the San Sebastian Festival, organisers of the “Lau Haizetara” Documentary Co-production Forum held every year as part of the activities carried out within the Industry Club at the San Sebastian Festival, and the FIPA, organiser of the FIPA Industry and, particularly, of events to present audiovisual projects, undertake among other questions to:

By signing this agreement, the parties reconfirm their desire and undertaking to strengthen relations between European professionals with a view to developing projects jointly and strengthening the audiovisual industry in the different regions. 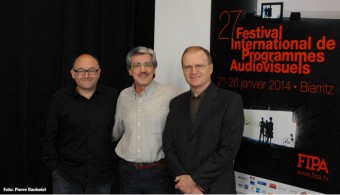