You are in: Home > 2014. 62nd Edition  > News > Five films presented in the Official Selection at the 61st San Sebastian Festival bag 18 Goya Awards.

The two big winners of the night at the ceremony of the 28th Goya Awards granted by the Spanish Academy of Cinematographic Arts and Sciences on 9th February participated in the Official Selection at the San Sebastian Festival: Vivir es fácil con los ojos cerrados (Living is Easy with Eyes Closed) and Las Brujas de Zugarramurdi (Witching and Bitching), screened out of competition.

Further, Minerita, directed by Raúl de la Fuente and presented in the Zinemira Kimuak, section landed the Goya for Best Documentary Short Film and Amour, by Michael Haneke, which was screened in Perlas after having premiered in Cannes 2012, was choosen as Best European Film. 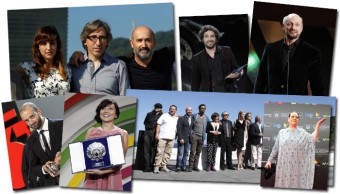