You are in: Home > 2014. 62nd Edition  > News > Collaboration between the Zineuskadi Association and Donostia Kultura to promote the film programme with subtitles in the Basque language, Filmazpit

The purpose of the Agreement is to establish a framework of collaboration between ZINEUSKADI and DONOSTIA KULTURA in order to organise and develop the programme “FILMAZPIT 2014”. Among the objectives of the "FILMAZPIT 2014" programme is the possibility of exhibiting films subtitled in the Basque language in different parts of the Basque Autonomous Community.

FILMAZPIT
Filmazpit was born in 2011 with funding from the Basque Government Vice-Ministry of Language Policy and with the objective of promoting quality films in their original versions and with subtitles in Basque. The collaborators with this programme managed by Donostia Kultura are, from the moment it was launched, the San Sebastian International Film Festival, Filmoteca Vasca and Tabakalera. This year, 2014, Filmazpit has started receiving funding from Zineuskadi.

The program envisages selecting films screened at the major film festivals running both in the Basque Country and in Spain as a whole; it also monitors the catalogues of distributors, above all independent. Whenever a film is considered interesting or appropriate for Filmazpit, its screening rights are acquired and it is subtitled in Basque and made available to all interested cultural agents at no cost whatsoever, so that they can organise not-for-profit screenings.

The San Sebastian Festival collaborates by recovering the subtitles of approximately 24 films every year for addition to the Filmazpit database, also periodically making DVD copies of films subtitled in Basque available for screening. For its part, Filmoteca Vasca receives and archives, on completion of their distribution, the digital copies of films obtained thanks to the Filmazpit programme. The Basque Government, through Zineuskadi, contributes to development of the programme with €40,000, added to any other actions it considers appropriate and necessary for said development.

CATALOGUE
The programme moves in a non-commercial film circuit and focusses on films for adults, largely interesting from the social point of view and for their ability to prompt debate. This is the case of most of the films making up the catalogue and is, generally-speaking, one of the major factors when it comes to choosing a particular film. The Filmazpit catalogue currently has twenty-nine titles, edited as follows in the different years:

The www.filmazpit.eu website contains complete information on the film programme and catalogue. The portal also contains the subtitled files ordered for screening by agents participating in the programme. This is the case of the subtitles of films prepared in recent years by the San Sebastian Film Festival (the subtitles of commercialised films) or those created by Donostia Kultura for its cycles and festivals. The website currently hosts more than 100 subtitled films.

SCREENINGS
Ever since the program was launched, more than 170 screenings have been organised, with a notable yearly increase. Almost 5,000 spectators have participated in said screenings.

By region, 22 towns in Gipuzkoa have enjoyed Filmazpit screenings, 10 in Bizkaia and 3 in Araba. It is also worth noting that films in the programme have been screened in Navarre and the French Basque Country. In most of these towns the screenings have been one-off showings; however, some of them run a regular programme: Berriz, San Sebastián, Vitoria, Ormaiztegi and Tolosa.

Apart from its work with town halls, Basque-teaching centres and associations, Filmazpit has contributed to festivals such as Dock of the Bay, the San Sebastian Human Rights Film Festival and the Rencontres sur les Docks (Bayonne), among others.

ZINEUSKADI
Zineuskadi was created in 2011 by the Basque Government Department of Culture with the objective of lending strategic backing to the Basque audiovisual sector. In this respect, it backs companies and professionals to help them achieve greater national, European and national development and reach. Among its missions, the Association promotes and supports the creation of professional networks in addition to defending European cinematic and audiovisual diversity and heritage, with special focus on productions of smaller commercial potential and in minority languages, particularly Basque.

With the objective of offering Basque citizens a decent selection of films in Basque, Zineuskadi manages Zinema Euskaraz. This programme monitors national and international production companies to permit the simultaneous release of films in their Basque version. This programme is intended for the commercial circuit.

FILMS
In the last two years, thanks to the Zinema Euskaraz programme, 26 films have been translated into Basque and screened for more than 62,000 spectators. These films are:

The resolution of the first call issued by Zinema Euskaraz 2014 has been published. So far this year the following films have been released and can now be seen in Basque: The Nutjob (Canada), Tarzan (Germany), La abeja Maya (Australia, Germany), Doraemon Stand by me (Japan), The Young and Prodigious Spivet (France); Dragoi Bola Z (Japan) and Ospea 20 pausora (USA).

The second call is open until June 25, and the third and last will open on September 2. This year it is expected that at least a dozen films will be dubbed or subtitled in Basque. The film catalogue and information about all programmes can be found on www.zineuskadi.eu. 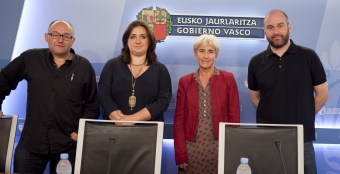 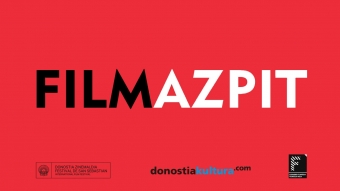