You are in: Home > 2014. 62nd Edition  > News > The San Sebastian Festival and Kontseilua present a new edition of the short film competition "euskaraz bizi nahi dut"

Paul Bilbao framed the short film competition within the dynamic of euskaraz bizi nahi dut, the initiative promoted by Kontseilua in recent years. "The objective of the competition is to spread as widely as possible the idea of euskaraz bizi nahi dut, to encourage, using film language, increasingly more people to take up the idea as their own and to achieve increasingly higher numbers of people who want to live their lives in Basque, so that those who know the language it speak it, and those who don’t know it learn it" said Bilbao. The works submitted to the competition must therefore reflect this objective.

As far as the topic is concerned, the short films must revolve around the theme of wanting to live in Basque: the reasons, the barriers, the joys, the frustrations and the kinships... the feelings we experience on wanting to live in Basque. "We are looking for short films that help us to convey all of this in a livelier, more realistic way using film language" highlighted the representative of Kontseilua.

This edition will include bigger prizes, and two new sections, one for professionals and the other for amateurs. In the section for professionals there will be awards of up to €3,500 and for amateurs up to €1,750. "The authors themselves will decide in which of the two sections they present their work", said Paul Bilbao. The deadline for submitting works is 8 September 2014.

For his part, the Director of the San Sebastian Film Festival, José Luis Rebordinos, underscored the importance of this kind of initiatives in promoting the use and normalisation of the Basque language in all areas, including film. "The number of films made in Basque is rising, as is the number of people who watch films in the language. We must continue to encourage this trend" said Rebordinos.

At Zinemaldia we know there is still a long way to go "but you make your path as you walk and we’re taking steps, we’re walking" said the Director of the San Sebastian Festival. The collaboration of Zinemaldia by organising the short film competition euskaraz bizi nahi dut is part of that dynamic; it is another step alongside many others, another initiative taken by the Festival to encourage use of the Basque language in film.

The best works will therefore be screened and the awards presented in one of its usual spaces at the 62nd San Sebastian Festival in September. The competition jury will also be composed of people who represent the world of films in the Basque language, alongside a representative of Zinemaldia and another of Kontseilua.

To close, the participants issued a reminder that all technical details of the competition (short film runtime, formats, deadline, jury, etc.) can be consulted on the website: http://www.euskarazbizinahidut.org 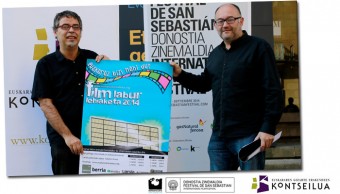