You are in: Home > 2014. 62nd Edition  > News > Denzel Washington will be opening the 62nd San Sebastián Film Festival with the European premiere of "The Equalizer", a film by Antoine Fuqua

The Equalizer, a film directed by Antoine Fuqua and starring Denzel Washington, will be opening out-of-competition the forthcoming San Sebastián Festival on the 19th of September. Actor and director will be presenting the film in the Kursaal Auditorium.

Denzel Washington plays McCall, a man who believes he has put his mysterious past behind him and dedicated himself to beginning a new, quiet life. But when McCall meets Teri (Chloë Grace Moretz), a young girl under the control of ultra-violent Russian gangsters, he can’t stand idly by – he has to help her. Armed with hidden skills that allow him to serve vengeance against anyone who would brutalize the helpless, McCall comes out of his self-imposed retirement and finds his desire for justice reawakened. If someone has a problem, if the odds are stacked against them, if they have nowhere else to turn, McCall will help. He is The Equalizer. Directed by Antoine Fuqua. Written by Richard Wenk. Based on the Television Series Created by Michael Sloan and Richard Lindheim. Produced by Todd Black, Jason Blumenthal, Denzel Washington, Alex Siskin, Steve Tisch, Mace Neufeld, Tony Eldridge, and Michael Sloan.

The Equalizer is the latest film by Antoine Fuqua, who has made some of the most outstanding action dramas of the last few years, since his debut in 1998 with The Replacement Killers, starring Chow Yun-Fat. Major Hollywood stars such as Jamie Foxx (Bait, 2000), Bruce Willis and Monica Bellucci (Tears of the Sun, 2003), Clive Owen and Keira Knightley (King Arthur, 2004), Mark Wahlberg (Shooter, 2007), Richard Gere and Ethan Hawke (Brooklyn’s Finest, 2009) or Gerald Butler and Morgan Freeman (Olympus Has Fallen, 2013) have played the leading roles in his films.

In 2001, Fuqua directed Training Day, a film starring Denzel Washington that has become a classic modern crime film. Thirteen years later, Washington and Fuqua once again join forces in this thriller that will be distributed by Sony Pictures Entertainment and will be going on general release in Spain on the 17th of October.

During the opening gala the star of the film, Denzel Washington, will be presented with the Donostia Lifetime Achievement Award.

Born in Mount Vernon (New York), Denzel Washington took his first steps in acting in university productions while he was studying Journalism. He decided to turn professional as an actor and joined the American Conservatory Theatre company, and didn’t take long to make the leap to television with the TV film Wilma in 1977. He made his film debut in 1981 with the comedy Carbon Copy, but he first became popular thanks to playing Dr. Philip Chandler in the television series St. Elsewhere, a role he would play for six years. At the same time, his film career began to take precedence thanks to the film by Norman Jewison, (A Soldier’s Story, 1984), and to his performances in (For Queen and Country, 1988) and (Cry Freedom, 1987), a film which earned him his first Oscar nomination as best supporting actor.

He established himself with Edward Zwick’s film, (Glory, 1989), which earned him the Oscar for best supporting actor. Washington then began to work with some of the most important contemporary directors: Mira Nair (Mississippi Masala, 1991), Spike Lee (Mo’ Better Blues, 1990; Malcolm X, 1992), Kenneth Branagh (Much Ado About Nothing, 1993), Alan J. Pakula (The Pelican Brief, 1993), Jonathan Demme (Philadelphia, 1993) or Tony Scott (Crimson Tide 1995), among many others. In a solid career that stretches out over more than three decades, Washington has also starred in films directed by Ridley Scott (American Gangster, 2007), Robert Zemeckis (Flight, 2012), as well as later films by Norman Jewison (The Hurricane, 1999), Jonathan Demme (The Manchurian Candidate, 2004) and Spike Lee (He Got Game, 1998; Inside Man, 2006).

In 2001, his performance as the violent policeman Alonzo Harris in Antoine Fuqua’s film, Training Day, earned Washington the Oscar for best actor, a second statuette that came on top of another three nominations for best actor for Malcolm X, The Hurricane and Flight. He has won two Golden Globes (as best supporting actor for Glory and best actor for The Hurricane), and he has been nominated for this award on another five occasions. His talent has also been recognised at the Berlin Film Festival, where he won the Silver Bear for best actor in 1993 for Malcolm X and in 2000 for The Hurricane. In 2010 he also won the prestigious Tony Award for the play Fences, and he has won the Black Reel Award five times, an award that acknowledges the work of Afro-Americans in cinema. Among the numerous prizes and awards that he has received throughout his career, honorary awards such as the British Academy of Film and Television Britannia Award (BAFTA) or the Sundance Festival Tribute to Independent Vision Award also stand out. 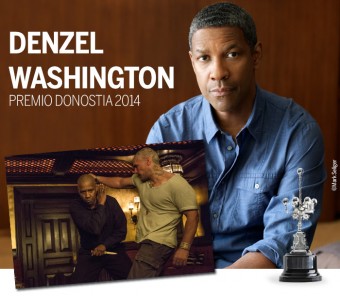