You are in: Home > 2014. 62nd Edition  > News > SAVAGE CINEMA confirms filmmakers, athletes and talents in attendance and announces a program of unmissable extracurricular activities

Once again, SAVAGE CINEMA will leap out from the screens and into the host city, San Sebastian. A diverse range of directors, athletes and talents will support our 2nd edition with their presence during the week, while a host of extracurricular activities will take place bringing the SAVAGE experience first hand to the celebrated streets of our city.

Friday 26th will be a celebration of motorcycle culture thanks to two world premieres. Anyone with two wheels attached to an engine will be able to join the ride out preceding the screening of On Any Sunday – The Next Chapter from Sagues to the amazing Velodromo pop up cinema. Later that night the ode to craftsmanship, The Greasy Hands Preachers, will be premiered with the attendance of all the starring crew (venue to be confirmed).

The SAVAGE CINEMA schedule will be published on September 13th and tickets will be available from September 14th at sansebastianfestival.com.

On Any Sunday, free outdoor screening with Bruce Brown!
When On Any Sunday premiered in 1971, it wasn't just any movie. Directed by Bruce Brown – the man behind the surfing classic The Endless Summer – and featuring Steve McQueen, this insider's take on motorcycle racing reached a worldwide audience bringing the heartfelt stories of real-life riders, earning an Academy Awards® nomination for Best Documentary Feature in the process.
Screening at Plaza Okendo on Wednesday 24th at 20:45h.

BMX Flatland Street Show with Viki Gómez
Jorge 'Viki' Gomez's method of facing flatland is almost philosophical. For him it is not just aerobatics on a bicycle; Viki defines his sport as "a fight between the mind, gravity and inertia, a way of surpassing the limits of your imagination". Viki is a top flatlander in Spain and one of the best in the world.
Don´t miss the opportunity to see him in action: Boulevard a las 11.30h, Kursaal a las 13h, Plaza Cataluña a las 16h.

Moto convoy On Any Sunday – The Next Chapter Motorcycle
A motorcycle ride out around San Sebastian to celebrate the world premiere of On Any Sunday – The Next Chapter led by Robbie Maddison and other film stars. A mosaic of different bikes, riders and ways of enjoying a thriving motorcycle culture.
Come ride with us! Meet at the Sagues explanade on Friday 26th at 19h, riding to Velódromo Antonio Elorza for the screening that will start at 20h.

Mundaka Ride Out by Wheels & Waves
The prestigious bike and surf culture event Wheels & Waves, held every year in Biarritz this year collaborates with SAVAGE CINEMA as we celebrate bike culture through films. To mark the occasion of the world premiere of The Greasy Hands Preachers, Wheels & Waves are putting on a very special ride to the legendary surf spot of Mundaka on Saturday September 27th . More info: www.wheels-and-waves.com

Blitz Motorcycles, featured in The Greasy Hands Preachers
Blitz Motorcycles is a Paris-based custom garage founded in 2010 by Fred Jourden and Hugo Jezegabel. Together, they conceive, customise and hand finish motorcycles to create unique, one-of-a-kind machines. Their love of eras past is no secret, so every project they undertake honours a legend while also telling its own story.

Bruce Brown, director of On Any Sunday
Director Bruce Brown is renowned as the pioneer of narrated lifestyle documentaries. The California native made waves with the surfing film The Endless Summer before earning an Academy Award nomination for the groundbreaking motorcycle documentary On Any Sunday in 1971. Bruce continues his legacy as executive producer of On Any Sunday: The Next Chapter, directed by his son Dana.

David Martelleur, ex pro skateboarder and star of Danger Dave
David Martelleur is a skater from Belgium who started skating and drinking at the age of 14. Two years later he got his first sponsor and competed for at European level for some time. At 20, he started using drugs, stopped skating and studying. Since 2005 he's lived in Asia, his life being shrouded in mystery. His unique charisma and attitude make of him a fascinating, highly-respected figure in the world of skateboarding.

Peter Mortimer and Nick Rosen, directors of Valley Uprising
Peter Mortimer founded Sender Films and was joined by his college friend Nick Rosen in 2004, together they have grown Sender into a leading global adventure film company.
In 2006, Sender joined forces with Big Up Productions to found the REEL ROCK Film Tour, which has become one of the biggest climbing and adventure film tours in the world, with over 400 shows globally.

Philippe Petit, director of Danger Dave
Petit has worked as director and actor in his own films since 2011. He shot his first feature film in Paris in 3 days, but Danger Dave took him 5 years. He is currently preparing his next feature, Continentale.

El Solitario, bike builder featured in The Geasy Hands Preachers
El Solitario is a revolution. We were tired of conventionalisms, corporation bullying and people trying to tell us we have to do. El Solitario is a lonely shout in this world, where non-sustainable systems systematically destroy sustainable ones, where short term profit has the power to overwhelm common sense and where progress is not progress but a constant destruction of an environment we will never be able to replace.

Richard Permin, freeskier featured in Days Of My Youth
Richard started skiing the age of 2 and between the ages of 7 and 15, he competed as an alpine racer. When he was 18, he made the transfer from racing to freestyle skiing, and competed professionally. At 22, Richard made the move to powder skiing, which led to an invitation to the 2008 Big Mountain Pro, where he took third place in 2009.

Robbie Maddison, moto-x freestyler featured in On Any Sunday – The Next Chapter
His career is one of world records, triumphs against adversity and mind-boggling jumps in iconic locations. Sparking worldwide fascination like a modern-day Evel Knievel, "Maddo" is known for numerous FMX victories and world-record distance jumps. On Any Sunday – The Next Chapter features Robbie as he plans and attempts yet another aerial feat never before seen in a new setting that´s more improbale, and impressive, than ever.

Roland Sands, motorcycle builder featured in On Any Sunday – The Next Chapter
Roland Sands is shaping the future of motorcycle riding – literally. After a ten-year pro career that logged multiple track records around the world, Roland moved on to building custom motorcycles. On Any Sunday - The Next Chapter reveals the beauty and craft of the high-performance bikes that Roland creates, and listens in as he and actor Mickey Rourke discuss their shared love for custom bike building.

Steve and Todd Jones, directors of Higher
Steve and Todd Jones are the Co-Founders of Teton Gravity Research, an action sports media company based in Jackson Hole, Wyoming that works closely with top athletes to create multimedia content, products and events that capture and celebrate the passion and enthusiasm of action sports. During the near twenty year existence of TGR, they have served as cinematographers, producers, and directors for more than thirty films and numerous television series. 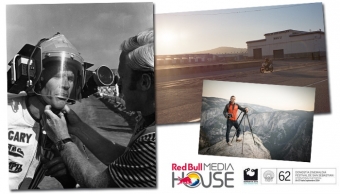