This morning, the latest edition of the San Sebastian Festival was presented in the María Cristina Hotel. Jose Luis Rebordinos, the Festival Director and Management Committee members Maialen Beloki and Joxean Fernández announced the programme and activities penned for this year as well as the members of some of the juries. They have disclosed as well the names of the guests that will be present at the San Sebastian Festival.

The Official Jury will be announced in the next days.

TALENTS AT THE SAN SEBASTIAN FESTIVAL

Throughout the 62nd edition of the San Sebastian Festival, numerous personalities from the international film scene will take to the red carpets and different festival hubs.

Denzel Washington, who will receive his Donostia Award, will join Antoine Fuqua to open the Festival on September 19 with The Equalizer. For their part, Charlotte Gainsbourg, Omar Sy together with directors Olivier Nakache and Eric Toledano will be the guests at the closing gala on the 27th with the film, Samba.

In the Pearls section, Jessica Chastain will present The Disappearance of Eleanor Rigby, while the film Relatos salvajes/Wild Tales will be accompanied by its producer, Pedro Almodóvar, its director Damián Szifrón and its leading character, Ricardo Darín.

Willem Dafoe will also make an appearance in Pearls with the film in which he plays the starring role, Pasolini, by Abel Ferrara, as will Laurent Cantet and Jorge Perugorría (Retour à Ithaque / Return to Ithaca). Screenings in this section will also be attended by other filmmakers, including Naomi Kawase (Futatsume no mado / Still Water), Diego Luna (Chávez), Mathieu Amalric (La chambre bleue / The Blue Room), Ira Sachs (Love Is Strange) and Céline Sciamma (Bande de filles / Girlhood).

The Pearls section will end with a flourish on September 26 thanks to the attendance of Donostia Award winner Benicio del Toro together with Josh Hutcherson, Claudia Traisac, Carlos Bardem and the director Andrea di Stefano who bring the closing film, Escobar: Paradise Lost.

Viggo Mortensen will introduce the film Jauja in Horizontes Latinos, with its director, Lisandro Alonso. On the other hand, the Spanish premiere of the series P'tit Quinquin, in Zabaltegi, will be attended by its director, Bruno Dumont. This section will also see the premiere of Negociador/Negotiator, to be introduced by its director, Borja Cobeaga, and leading characters, Ramón Barea, Josean Bengoetxea and Carlos Areces at the Zinemira Gala on September 22.

The guests at this year's Culinary Zinema will include the director Lasse Hallström (The Hundred-Foot Journey) and Wayne Wang (Soul of a Banquet).

Concha Velasco will also visit this 62nd edition of the Festival to present the Zinemira Award to the filmmaker, Pedro Olea.

Maribel Verdú and the director Paco Plaza will bring Ultravioleta, a short film forming part of the Cinergía project, a new initiative by Gas Natural Fenosa to be presented at the San Sebastian Festival.

ANOTHER LOOK JURY
The virtual press box is already activated

The Festival's site Virtual Press Box is activated and the publicity materials of the films of the 62nd edition are already available for the registered users.

Pictures, trailers and or excerpts, audio clips, press kits and other publicity materials that have been made available by the films representatives can be found at the Virtual Press Box. 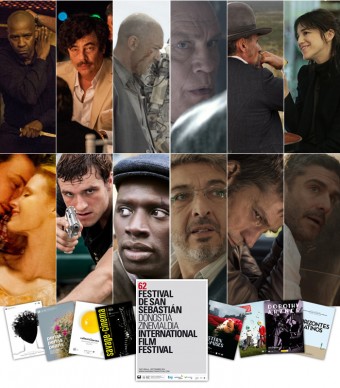