You are in: Home > 2014. 62nd Edition  > News > The San Sebastian Festival presents the improvements made to the Kursaal Auditorium

A rock and textile cladding has been fitted to several parts of the auditorium: rear wall, the wall separating the amphitheatres and side entrance ramps; and a textile cladding to the mouth and cornice of the stage and ceiling.

The new cladding has reduced the reverberation time in medium frequencies: from the 1.57 prior to the work until the present rate of 1.23. This new reverberation time meets the quality requirements for a theatre the volume of the Kursaal.

On the other hand, the STI (Speech Transmission Index) has also improved, thereby avoiding throughout the auditorium points below the threshold of what is considered to be "good intelligibility": if, before the work, in certain parts of the auditorium, the STI value was lower than the recommended 0.60, after the new improvements the value now stands at between 0.60 and 0.80. 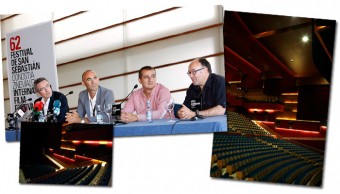