Madrid, 16 September 2014. Movistar TV is, for the second year running, official sponsor of the 62nd edition of the San Sebastian Film Festival (September 19-27). It has therefore launched several actions related to the event. Specifically, it has developed the official Festival app, will organise along with the BirraSeries forum the debate The false border between cinema and television series, and will carry out an action related to football in support of research into acute leukaemia.

Telefónica Studios will also celebrate its anniversary at the Festival. In its first year of existence, the Telefónica production company has become one of the most important of its kind in Latin America and Spain with titles particularly including Juan José Campanella's Futbolín (Foosball), Eugenio Mira's Grand Piano, the hit animation Las aventuras de Tadeo Jones (Tad, The Lost Explorer) and the television series Isabel and Víctor Ros. Among its coming releases are Torrente 5: Operación Eurovegas, Palmeras en la Nieve and Regression, by Alejandro Amenábar. Relatos Salvajes (Wild Tales), a Telefónica Studios co-production through Telefé with El Deseo, will be screened in the "Pearls" section of the Festival.

Movistar TV has designed and developed the official Festival app, which is free of charge and can be obtained in three languages (English, Basque and Spanish) from the three leading app platforms (App Store, Windows Phone and Google Play). In the app, users will find all of the Festival news and events, with videos of the day, photo galleries, trailers and promotional clips, in addition to the complete programme and detailed information for all of the films at this 62nd edition. The app also permits users to mark their programme preferences as favourites, give their opinion of films and share the contents on social networks.

On the other hand, Movistar TV, with the BirraSeries forum, is organising the round table The false border between cinema and television series, which will unite bloggers and journalists specialising in television series on 20 September at 20:00 in the Keler Space (Paseo Ramón Maria Lili, no. 2).

The participants are the journalists Mariló Garcia (head of the series section of the Cinemanía magazine and author of the blog 'Yonomeaburro'), Diego del Pozo (head of I+D Ficción at Atresmedia Television and author of 'Carrusel de Series'), Alberto Rey (author of the 'El Mundo' daily blog, 'Asesino en Series') and Miriam Lagoa (Movistar TV, responsible for the blogs 'Seriéfilos' in Eldiario.es and 'En Terra de Series' in Terra); the moderator is Alberto Nahum García (Lecturer on Audiovisual Communication at the University of Navarra and author of the blog, 'Diamantes en Serie'). During the debate, open to the general public, the discussion will revolve around questions such as: Are television series still the younger sister of cinema or is it true that the best cinema is now to be found in television series? What can cinema learn from TV and vice-versa? Why is the popularity of miniseries on the rise? Are they 10 hour films or a new way of making fiction on television?

Finally, the presence of Movistar TV will include an action of solidarity related to football in collaboration with Fundación Telefónica on September 25 and 26. The Plaza de Okendo will be the setting for a goal post; for every penalty scored, €50 will be donated to the Cris Foundation for Cancer Research focussed on acute leukaemia in children. 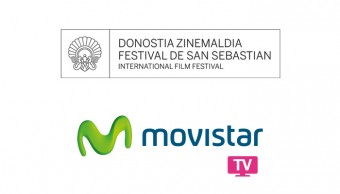