The four-time Academy Award nominee will receive the Lifetime Achievement award honouring his illustrious career the evening of Saturday, September 17th followed by a screening of his latest film The magnificent seven.

On September 17th, Ethan Hawke will be honoured with a Donostia Award at the 64th edition of the San Sebastian Festival. The award will be presented to Hawke (Austin, Texas, 1970) in a ceremony celebrating his three decade-long career prior to the festival’s gala screening of The Magnificent Seven.

Hawke’s career, spanning thirty years and four Academy Award nominations, has solidified his reputation as a truly multifaceted artist, challenging himself as a screenwriter, director, novelist, and actor of the stage and screen.

Marking another one of his celebrated projects with Linklater, Hawke starred opposite Julie Delpy in the critically acclaimed film Before Sunrise and its two sequels Before Sunset and Before Midnight. The trio co-wrote the screenplays for Before Sunset and Before Midnight and received Academy Award and Independent Spirit Award nominations for both scripts. Hawke, Linklater, and Delpy were honoured with the Louis XIII Genius Award for achievement in cinematic works for the Before films at the BFCA Critics Choice Awards.

Hawke’s acting career has always lived side by side with his love of writing and telling stories. He is the author of four novels: The Hottest State (1996), Ash Wednesday (2002), Rules for a Knight (2015), and the graphic novel Indeh (2016), which debuted #1 on the New York Times Best Seller List.

The Magnificent Seven marks his latest collaboration with Antoine Fuqua. The film, to be screened at San Sebastian after closing Venice, is a remake of John Sturges’s 1960 movie, based on Akira Kurosawa’s Shichinin no Samurai / Seven Samurai, with a screenplay by John Lee Hancock (The Blind Side) and Nic Pizzolatto (True Detective). Hawke stars in the film alongside Denzel Washington, Chris Pratt and Vincent D’Onofrio.

Earlier this year marked one of the actor’s most celebrated and critically acclaimed roles as the late Chet Baker in Robert Budreu’s Born to Be Blue, a performance that, according to Rolling Stone, contained “everything that makes Ethan Hawke an extraordinary actor - his energy, his empathy, his fearlessness, [and] vanity-free eagerness to explore the deeper recesses of a character,” and which Variety called “one of the best performances of his career.” In addition to Born to Be Blue and The Magnificent Seven, this year brings a diverse and exciting slate of work from Hawke, including The Phenom, Maggie’s Plan, and In A Valley of Violence.

Last year the Festival opened with Alejandro Amenábar’s Regression, starring Hawke, who unfortunately was unable to attend due to his filming commitments on The Magnificent Seven. As the actor’s ever-expanding film repertoire comes full circle, the festival is thrilled to be able to honour Hawke in person with this year’s Donostia Award.

"Gather ye rosebuds while ye may," is a phrase a young Ethan Hawke took to heart while filming Dead Poets Society, the Academy Award-winning drama that launched his career as an actor. Thirty years and several Tony® and Oscar® nominations later, he has emerged a multifaceted artist, challenging himself as a novelist, screenwriter, and director.

Hawke most recently appeared in Robert Budreau’s Born to Be Blue, for which he received rave reviews out of the Toronto Film Festival for his depiction of legendary jazz trumpeter Chet Baker. IFC released the film on March 25, 2016. Hawke’s film Maggie’s Plan, a comedy in which he stars opposite Greta Gerwig and Julianne Moore, also premiered at last year’s Toronto Film Festival, and was released by Sony Pictures Classics on May 20, 2016. He was also seen in Noah Buschel's The Phenom, which was released in June 2016.

Additionally, Hawke's graphic novel, "Indeh," with illustrator Greg Ruth, was published by Grand Central Publishing on June 7, 2016. "Indeh" captures the narrative of two nations at war who strive to find peace and forgiveness in a time of great upheaval. It debuted at #1 on the New York Times Bestseller List for Hardcover Graphic Novels.

Hawke will next be seen in The Magnificent Seven, directed by Antoine Fuqua. The MGM remake of the iconic film also stars Denzel Washington, Chris Pratt, and Peter Sarsgaard. The film will be making its world premiere at the 2016 Toronto International Film Festival as the opening night film. Sony will be releasing the film on September 23, 2016. He will then be seen in Blumhouse and Ti West's "In a Valley of Violence," which premiered at the 2016 SXSW Film Festival, and will be opening in te US on October 21, 2016.

Hawke recently made his documentary directorial debut with Seymour: An Introduction, which premiered at the 2014 Telluride Film Festival and later played internationally at the Toronto International Film Festival. The project follows the life of the legendary pianist and piano teacher Seymour Bernstein. IFC released the film on March 13, 2015.

Marking another one of their celebrated projects, Hawke starred opposite Julie Delpy in the critically acclaimed film Before Sunrise and its two sequels Before Sunset and Before Midnight. The trio co-wrote the screenplays for Before Sunset and Before Midnight and received Academy Award and Independent Spirit Award nominations for both scripts. Hawke, Linklater and Delpy were honored with the Louis XIII Genius Award for achievement in cinematic works for the Before films at the BFCA Critics Choice Awards.

Behind the lens, Hawke made his directorial debut in 2001 with his drama Chelsea Walls. The film tells five stories set in a single day at the Chelsea Hotel and stars Uma Thurman, Kris Kristofferson, Rosario Dawson, Natasha Richardson, and Steve Zahn. Additionally, he directed Josh Hamilton in the short film Straight to One, a story of a couple, young and in love, living in the Chelsea Hotel.

In late 2015, Hawke released his first children’s book “Rules for a Knight” through Knopf, which features illustrations by his wife, Ryan Hawke. “Rules for a Knight,” a New York Times best-seller, is framed as a long-lost document, recently found and republished by Hawke, a distant relative of the knight, Sir Thomas Lemuel Hawke. In addition to his work as a novelist, in April 2009, Hawke wrote an in-depth and celebrated profile of icon Kris Kristofferson for Rolling Stone. In 2002, his second novel, "Ash Wednesday", was published by Knopf and was chosen for Bloomsbury's contemporary classics series. In 1996, Hawke wrote his first novel, "The Hottest State", published by Little Brown and now in its nineteenth printing. In his sophomore directorial endeavor, Hawke adapted for the screen and directed the on-screen version of The Hottest State and also directed a music video for the film, featuring Lisa Loeb.

At the age of twenty-one, Hawke founded the Malaparte Theater Co., which remained open for more than five years giving young artists a home to develop their craft. The next year, in 1992, Hawke made his Broadway debut in "The Seagull." Additionally, he has appeared in "Henry IV" alongside Richard Easton on Broadway; "Buried Child" (Steppenwolf); "Hurlyburly," for which he earned a Lucille Lortel Award Nomination for Outstanding Lead Actor and Drama League Award Nomination for Distinguished Performance (The New Group); Tom Stoppard's "The Coast of Utopia," for which he was honored with a Tony Award nomination for Best Featured Actor in a Play and Drama League Award nomination for Distinguished Performance (Lincoln Center); the inaugural season of The Bridge Project's double billings of "The Cherry Orchard" and "A Winter's Tale," which garnered Hawke a Drama Desk Award Nomination for Outstanding Featured Actor in a Play (Brooklyn Academy of Music and The Old Vic); and "Blood From A Stone" (The New Group) which earned him a 2011 Obie Award for Performance. In 2007, Hawke made his Off-Broadway directing debut with the world premiere of Jonathan Marc Sherman's dark comedy, "Things We Want". In 2010, Hawke directed Sam Shepard's "A Lie of the Mind," for which he received a Drama Desk Nomination for Outstanding Director of a Play as well as recognition in the New York Times and The New Yorker top ten lists of the leading theatre productions in 2010. In 2012, he starred in Chekov's "Ivanov" for the Classic Stage Company. In 2013, he directed and starred in "Clive," a stage adaptation of Bertolt Brecht's "Baal," by Jonathan Marc Sherman (The New Group), and completed a successful run of Lincoln Center Theatre's production of “Macbeth” in the title role.

Hawke resides in New York and is married with four children. 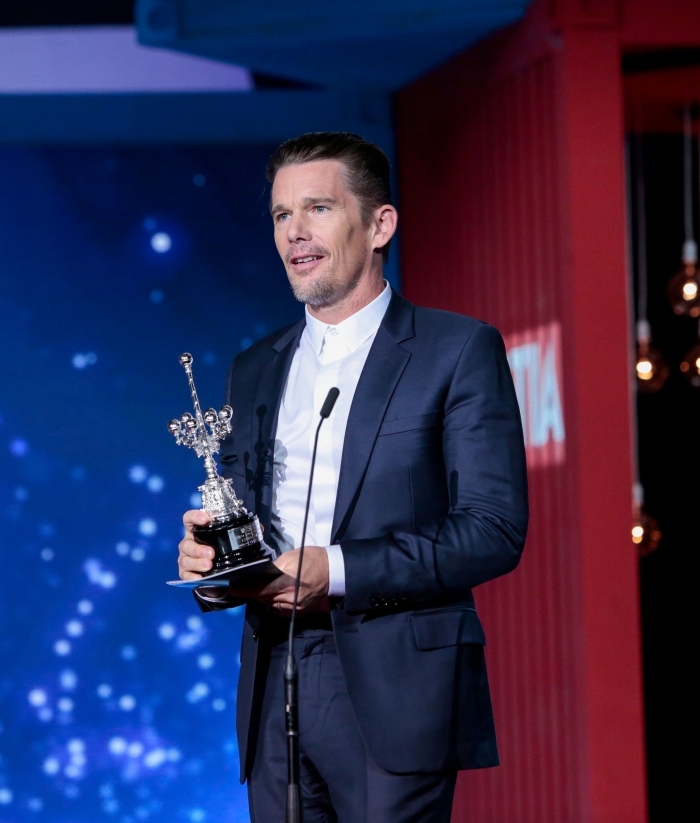 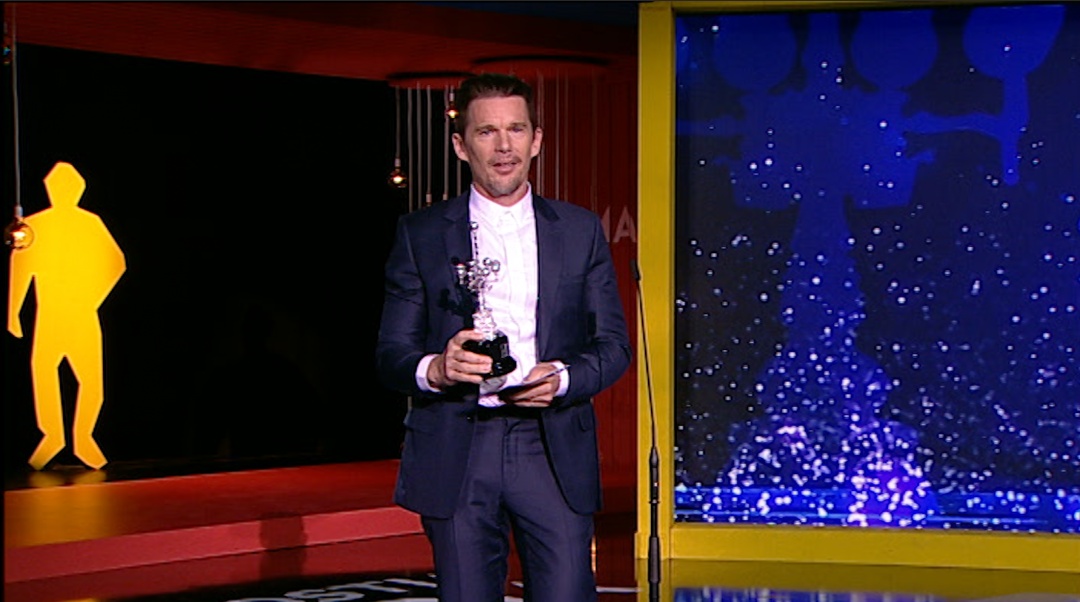