You are in: Home > 2016. 64th Edition  > News > New announcement of 'Ikusmira Berriak', the interinstitutional programme of support to new audiovisual projects

IKUSMIRA BERRIAK is a programme of support to audiovisual projects committed to innovation and experimentation in areas of both cinematic language and means of production.

The initiative, which celebrates its second edition this year, is jointly organised by Tabakalera-International Contemporary Culture Centre, the San Sebastian Festival and San Sebastian, European Capital of Culture 2016; it also enjoys the collaboration of Donostia Kultura and the Filmoteca Vasca Foundation.

IKUSMIRA BERRIAK focusses equally on new talents, audiovisual producers and industries. It also seeks to act as a catalyst in the territorial context (of both creation and production), thereby fostering the consolidation of a platform for the exhibition and internationalisation of contemporary film & audiovisuals.

The programme for this edition maintains its links to national and international initiatives connected to the region, such as the Kimuak short film selection, the annual Lab screenings (the Clermont-Ferrand Festival selection of experimental short films), and the International Film Students Meeting (EIECINE) held yearly during the San Sebastian Festival.

The programme is articulated around three axes: training, production and exhibition. The programme will therefore facilitate space, context and time for the creative development, aid for start of the production and a plan of support for post-production in the shape of an award.

For six weeks, the selected creators can work on their projects at the Tabakalera installations in San Sebastian. The residency will end with presentation of the projects to members of the local, national and international industry present at the San Sebastian Festival (whose Industry Club had 1,496 accredited guests in 2015).

From IKUSMIRA BERRIAK a total of four residencies will be awarded, one for each of the following groups:

The registration period will run from 5 February to 1 April 2016, and applicants can register on the website www.ikusmiraberriak.eu.

The basic information must be submitted in Basque, Spanish and English, while the rest of the information can be attached in any of the three languages.

Once the registration deadline has closed, a committee of film industry experts will make a first selection based on the documents submitted.

In the second part of the selection process, the directorate of IKUSMIRA BERRIAK will choose the final candidates, to do which it includes the possibility of an interview in person or over the Internet.

The final selections will be notified in mid-May and once the conditions of participation have been confirmed, the chosen projects will be announced.

The committee’s decision is final and not open to appeal. The committee can decide not to confer the award in any of the groups and/or to grant more than one residency to one of the groups.

DEVELOPMENT OF THE PROGRAMME

The programme will begin on 15 August 2016 and end on Sunday 25 September. For four weeks, the residents will work on the development of their projects and their agenda will include different tutorials and masterclasses.

In the fifth week of their stay they will prepare for the pitching session and will present their projects in the framework of the Film Festival, in its industry area.

Until the end of the Film Festival, they will have the opportunity to participate as professionals in the Festival activities, also being able to attend the EIECINE masterclasses and the meetings on the professional agenda, thereby coming to the full 6 weeks of their residency.

Throughout this entire time, they will have free admission to activities on the Tabakalera cultural programme and will be given the opportunity to present in the cinema a carte blanche linking their work with its cinematic references.

The work spaces for the resident filmmakers will be the installations of Tabakalera-International Centre for Contemporary Culture. In addition to the cultural project itself, the Tabakalera building houses the offices of the Filmoteca Vasca, the San Sebastian Festival, the Etxepare Basque Institute, the Basque Government programme Zineuskadi and the Fundación Kutxa, thereby lending strengthen to a creative community and fostering spaces for collaboration and relations between the different agents and the citizens.

Following the training and production stages, IKUSMIRA BERRIAK also aims to support exhibition of the projects developed. The San Sebastian Festival therefore guarantees inclusion of the projects in its programme, in one of the main sections of the event.

Furthermore, Tabakalera, International Centre for Contemporary Culture undertakes to screen the works during the year and in the framework of its film programme. 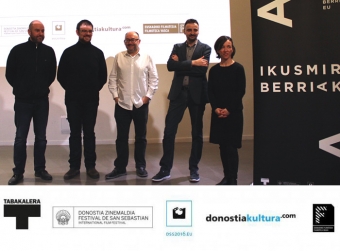