In February was opened the call for the second edition of IKUSMIRA BERRIAK, an interinstitutional programme of support for new audiovisual projects committed to innovation and experimentation, or dedicated to new film language or new production systems.

The programme is co-organized by Tabakalera-International Centre for Contemporary Culture, the San Sebastian Film Festival and DSS2016 European Capital of Culture 2016 Foundation; in collaboration with Donostia Kultura and the Basque Film Archive Foundation. Ikusmira Berriak is a programme that includes training, production and exhibition, until completion of the project and its showing in the San Sebastian Film Festival.

The selected projects will be presented to producers and international sales agents during the San Sebastian Film Festival via pitching sessions in order to achieve coproduction’s agreements and to help guide its future exhibition and internationalization.

The three institutions participating in the project have now named the members of its Committee of Experts: Paz Lázaro, Panorama Programming Manager for the Berlin Festival; Ada Solomon, film producer and founder of HiFilm Productions; and Sergio Oksman, Brazilian filmmaker (Goodbye America, A Story for the Modlins, O Futebol) and director of the production company Dok Films.

These three professionals of international standing will be responsible for selecting the four projects to participate at IKUSMIRA BERRIAK Residencies Programme. In turn, the Committee of Experts will have the task of accompanying and advising the projects, also completing the programme of activities in the training stage alongside other guest professionals.

Paz has been working for several years in the world of movie production, with films including Nómadas (Spain, 2000), Cosa de brujas (The Witch Affair, Spain, 2002), Sobre el arco iris (Spain, 2003) or the documentary Fallen Angel: Gram Parsons (Germany, 2004), and in theatre production with Constanza Macras‚ Dorky Park Company (No Wonder, Sure).

She has worked as purchasing advisor at The Match Factory, with projects such as Oslo August 31st by Joachim Trier, Sueño y silencio (Dream and Silence) by Jaime Rosales, Alps by Yorgos Lanthimos, Abrir Puertas y Ventanas (Back to Stay) by Milagros Mumenthaler and scripts by Athina Rachel Tsangari, Miranda July and Cesc Gay.

She is also a member of the Instituto de la Cinematografía y de las Artes Audiovisuales (ICAA) and has curated other programmes, among which are the Spanish Film Club.

Originally from Brazil, Sergio Oksman studied journalism in São Paulo and film in New York. He lives in Madrid, where he works as a producer and professor. His career is tied to documentaries and Elías Querejeta produced six of his works. He has been directing the production company Dok Films since 2000.

Among the titles he has helmed are La Esteticién (2004), Goodbye, America (2006), Notes on the other (2009) and A Story for the Modlins (2012), the latter of which won the Goya for Best Documentary in 2013. His films have been screened at hundreds of international festivals (including Sundance, San Sebastian and New York) and have landed numerous awards.

His latest project, the full-length film O Futebol (2015) was presented at the last edition of the Locarno Festival in its Concorso Internazionale.

Born in Bucharest (1968). As a teenager dreamt to be an actress. Graduated in Ambiental Engineering in Bucharest, never worked as an engineer.
The fall of the wall changed the perspective. Worked in advertising, building on the new opportunities in Romania in the wild capitalism of the ‘90’s. In ’93 switched to film production as Production manager, Executive Producer in Domino Film working on Romanian & International productions with great names as Charlotte Rampling, Quincy Jones, Jeremy Irons, Fanny Ardant, Franco Zeffirelli, The Stomp etc.

In 2004 opens together with Avi Karpick the film production company Hi Film.
Since then produced & coproduced over 30 films, won over 150 awards around the world in major festivals like Sundance, Berlin, Cannes, Locarno or Sarajevo. Co-produced with over 15 countries around Europe & sold her films in over 50 territories around the world.
Latest achievements as producer include Golden Bear for Child’s Pose by Calin Netzer, Silver Bear for Best Director for Aferim! by Radu Jude & Eurimages Award for Contribution of the development of European Co-productions in European Film Awards 2013.
Worked with the main figures of the Romanian New Cinema as: Cristian Nemescu, Radu Jude, Razvan Radulescu, Adrian Sitaru, Alexandru Solomon and produce debut features of the upcoming Romanian new directors as Paul Negoescu, Cristi Iftime, Ivana Mladenovic.
Initiator of NexT Int’l Film Festival in Bucharest, EAVE National Coordinator, advisory member of the board of Romanian Center for Contemporary Dance, member of the board of the National Cultural Fund and member of the board of the European Film Academy.

IKUSMIRA BERRIAK grants a total of four residencies. Filmmakers interested in participating in this project can register and submit their projects until 1 April 2016, by means of the website www.ikusmiraberriak.eu. 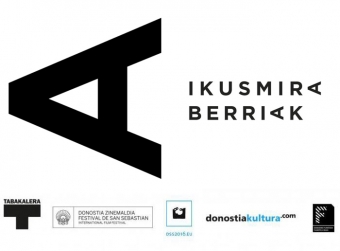