You are in: Home > 2016. 64th Edition  > News > 4K technology comes to the San Sebastian Film Festival with Hispasat

The workshop “Cinema and Technology. The challenges of filming in 4K” will take place in room 9 of Kursaal at 11:00 on the 20th
Friday, September 9th, 2016
Facebook Twitter Email
Send page by email
Print
Send page by email

Ultra High Definition (UHD) technology comes to the 64th edition of the San Sebastian Film Festival with Hispasat. The Hispasat 4K International Short Film Festival, one of the first events in the world dedicated to short films shot and integrally post-produced in 4K, will hold its awards ceremony on Tuesday, September 20th, at 19:30, in Tabakalera, International Centre for Contemporary Culture. At the event, the audience will have the opportunity to watch the works screened in 4K. Admission is free, subject to available seating.

The workshop “Cinema and Technology. The challenges of filming 4K” will also take place at 11:00 on the 20th in room 9 of the Kursaal, where representatives of technology companies will debate on the opportunities and challenges of this new Ultra High Definition standard for cinematic production (access limited to the San Sebastian Festival passholders).

Hispasat, the Spanish satellite communications company leader in the distribution of content in Spanish and Portuguese, launched the international short film festival last year with the aim of promoting the creation and exhibition of audiovisual content shot in 4K, the latest major technology revolution in the sector. A format which, on multiplying by four the number of pixels on a conventional high definition screen, offers spectators a unique experience with a quality of image never seen before.

This second edition of the event, taking place in the framework of the San Sebastian Film Festival, also brings important new features. Two new awards have been introduced: Best Director, giving the winner the opportunity to direct a feature film produced by Cine365 Film during 2017, and the Jury Prize, sponsored by the new television range, Samsung SUHD.

The list of this year’s finalist short-films and all details related to the Hispasat 4K International Festival will be announced at the press conference on Monday 19th at 12:30, in the Kursaal press club.

The Hispasat 4K International Festival is sponsored by the Cine365 Film production company, Samsung and Dolby Laboratories. Other state-of-the-art technology companies in the audiovisual sector, such as SGO, Fujifilm and the Ad Hoc sound studio, in addition to RTVE, the television network leading the way in UHD development in Spain, and the graphic communication agency Azento de Diseño, have joined the initiative to make this unique world event possible. 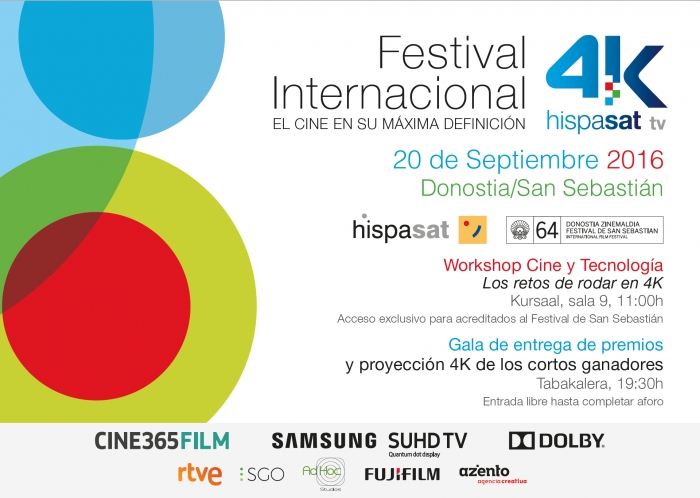