To carry out its activity, The Industry Club enjoys the backing of the Basque Government Department of Economic Development and Competitiveness, the Ministry of Industry, Energy and Tourism and the Creative Europe Programme.

The main activities organised are the Europe-Latin America Co-Production Forum and Films in Progress. In addition, in collaboration with IBAIA (Association of Independent Audiovisual Production Companies of the Basque Country), it organises the Lau Haizetara Documentary Co-Production Forum.

At the III Europe-Latin America Co-production Forum 15 developing projects from Europe and Latin America will be presented (with at least 20% of their funding already assured). Those responsible for the works will have the opportunity to present their projects (pitching) and will also enjoy a personalised meeting agenda with industry professionals.

The Forum will similarly act as a meeting point for accredited industry guests at San Sebastian, offering in these three days a place to get together and network. In addition, while the Forum is underway, different talks and round tables will be organised in the San Telmo Museum on current issues in the film industry with a view to fostering the exchange of experiences and knowledge.

In the frame of the Forum, this year the San Sebastian Festival is organising a Focus on Canada, in collaboration with Telefilm Canada. A delegation of 12 Canadian producers will come to San Sebastian to discover the Festival first hand, establish contacts with professionals and participate both in the Co-production Forum and in the other Industry Club activities.

Films in Progress 26 will yet again this year present six Latin American films faced with difficulties at the post-production stage. These films will be presented to an audience of industry professionals with the aim of obtaining the funding the need for their completion and distribution.

The EGEDA Award for Best Project at the III Europe-Latin America Co-production Forum and the Films in Progress 26 Industry Award will be announced at the Industry Cocktail to round off these three working days.

Meanwhile, and throughout the whole Festival, The Industry Club will have its hub at the Kursaal Centre where it will programme a series of presentations, round tables and activities in rooms 8 and 9. The complete programme of the Professional Agenda with all activities and their respective times will be announced in the first week of September.

The Industry Club provides all accredited industry professionals with services to make their stay in San Sebastián as productive and satisfactory as possible. They will also have access to the Professional Area of the official website, where they will find information on Festival attendees, contact details of films programmed at the Festival and the Film Library, the technical provider of which is Cinando. Codes of access to the Film Library will be provided in situ at the Industry Club premises at the start of the Festival.

with the support of: 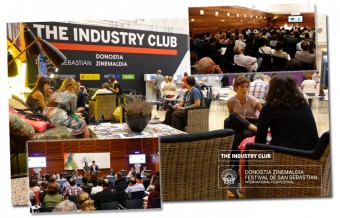