The Spanish Association of Cinematographic Informers (AICE) presented its Feroz Awards to the best Spanish films of 2015. The two films that gathered the most awards were presented at the 63rd edition of the San Sebastian Film Festival.

Truman by Cesc Gay competed in the Official Section at the Festival’s last edition and won the best actor award for its leading actors, Ricardo Darin and Javier Cámara. This time Darin won the Feroz Award for best leading actor, while Cesc Gay and Tomàs Aragay scooped the award in the best screenplay category.

On the other hand, Mario Casas received the best supporting actor award for his work in the film by Álex de la Iglesia Mi gran noche (My Great Night), which also participated in the Official Section out of competition at the Festival.

The Feroz Award for best comedy went to Negociador (Negotiator) by Borja Cobeaga, a film that had its world premiere at the Zabaltegi section of the Festival’s 62nd edition. 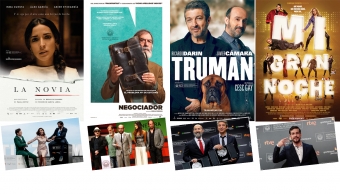