You are in: Home > 2016. 64th Edition  > News > The producers Nadia Turincev and Corinne Castel make up the Official Jury and the Zabaltegi-Tabakalera's jury, respectively

Two outstanding professionals from the film scene will join the juries of the 64th San Sebastian Film Festival. The producers Nadia Turincev and Corinne Castel will make up the Official Jury and the Zabaltegi-Tabakalera’s jury, respectively.

The Official Selection Jury is chaired by the Danish moviemaker Bille August. The author of Pelle erobreren (Pelle the Conqueror), winner of two Palmes d’Or at Cannes and an Academy Award, will be accompanied in his deliberations to decide the Golden Shell by the Argentinian director Anahí Berneri, the Spanish producer Esther García, the Chinese moviemaker Jia Zhang-ke, the German costume designer Bina Daigeler, the North American director of cinematography Matthew Libatique and the above mentioned Turincev.

In its first competitive year, Zabaltegi-Tabakalera will have a jury made up of the Spanish filmmaker Virginia García del Pino (chair), the Uruguayan filmmaker Federico Veiroj and the said Castel.

Nadia Turincev was born in Moscow (USRR) in 1970. Grew up in Paris. Studied cultural anthropology at Paris X-Nanterre University. At the age of 12, she felt in love with Andrei Konchalovsky and began watching films. At 16, she started working - as a trainee on Nikita Mikhalkov’s Oci Ciornie (Dark Eyes), making sandwiches for Marcello Mastroianni. Then as set interpreter (Russian, French, English, Italian). And then at various positions in several European bodies such as ACE-European Film Studio, Europa Cinemas, the European Producers Club, EU Media Development programme. And later as a member of the selection committee of Cannes’ Directors Fortnight and at Moscow IFF, as artistic director. And then «When I grow up, I want to be a film producer» so in July 2007, together with Julie Gayet, she founds the production house Rouge International. Their motto: Universality is when you push out the walls of your kitchen. They work very hard and have lots of fun. They have so far produced and coproduced 16 films: 8 Fois debout / 8 Times Up by Xabi Molia (San Sebastian 2009), Fix ME by Raed Andoni (Sundance 2010), Bei Mian / The Back by Liu Bingjian (Rome 2010), Bonsai by Cristián Jimenez (Cannes and San Sebastián 2011), A Spell to Ward Off The Darkness by Ben Rivers & Ben Russell (Locarno 2013), Des Étoiles by Dyana Gaye (Toronto 2013), La voiz en off / Voice Over by Cristián Jimenez (Toronto and San Sebastián 2014), La Fille du Patron / The Boss’s Daughter by Olivier Loustau (Mons 2016), La Taularde / Jail Bird by Audrey Estrougo (Busan 2015), Comoara / The Treasure by Corneliu Porumboiu (Cannes and San Sebastian 2015), Rodinny film / Family Film by Olmo Omerzu (San Sebastian 2015), Mariupolis by Mantas Kvedaravicius (Berlinale 2016), Ganesh Yourself by Emmanuel Grimaud (Cinéma du Réel 2016), The Ride by Stépahnie Gillard (Tribeca 2016), Mimosas by Oliver Laxe (Cannes 2016), Raw by Julia Ducournau (Cannes 2016).

After studying cinema, communication and ethnology at University, Corinne Castel then entered the world of contemporary art, specialising in the production of films and installations. Deeply engaged in the singularity of the creative process, she has been involved in artistic commissions for the Pompidou Center since 1993 and has worked in production with Anna Sanders Films since 1999, working with the likes of Stan Douglas, Mona Hatoum, Douglas Gordon, Mike Kelley, Johan Grimonprez, Pierre Huyghe, Gerard Byrne, Jordi Colomer, Thierry Kuntzel, Chris Marker, Ugo Rondinone... A strong promoter of emerging artists, she produced the first films from Virgil Vernier, Mati Diop, Mohamed Bourouissa, Maïder Fortune... She has been working with her own production company since 2012, encouraging and promoting an hybrid genre between art and cinema. 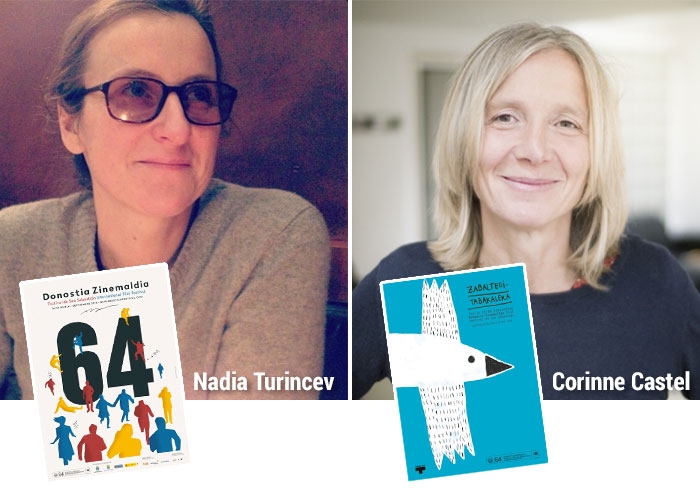