Log-in to My Festival | New user
My Festival
My Invoices
Virtual pressbox
• All films
Log-in details
Contact
CONTENT
You are in: Home > 2017. 65th Edition  > News > Aronofsky, Baker, Guédiguian, Haneke, Koreeda, McDonagh, Ramsay and Virzì, among others, join the Pearls selection

Mother!, starring Jennifer Lawrence, Javier Bardem and Michelle Pfeiffer, is the latest film from Darren Aronofsky (New York, 1969), the maker of Pi (1998), Best Director Award at Sundance; the cult movie Requiem for a Dream (2000); The Wrestler (2008), Golden Lion in Venice; and Black Swan, Academy Award for Best Actress (Natalie Portman). His latest production is a psychological thriller that will compete at the coming Venice Festival.

The Florida Project was one of the most applauded films at the last Cannes Festival, where it participated in the Directors’ Fortnight. Here, Sean Baker (Summit, United States, 1971) tells us about the summer holidays spent by a six year-old girl and her friends, while the adults around them struggle through hard times, after presenting at Sundance 2015 Tangerine, his fourth feature and the first to be completely shot with an iPhone, which harvested around twenty awards.

The author of Marius et Jeannette / Marius and Jeanette (1997), Best Actress César for Ariane Ascaride; Marie-Jo et ses 2 amours / Marie-Jo and Her Two Lovers (2002), which competed at Cannes; and Les neiges du Kilimandjaro / The Snows of Kilimanjaro (2012), selected for Un Certain Regard, congregates his regular accomplices on the cast of La villa / The House by the Sea. Robert Guédiguian (Marseille, France, 1953) brings a tale of three siblings who reunite at their father’s house in a small cove near Marseille at the height of winter, and which will compete in Venice. In 1998 Guédiguian won the Special Jury Prize for À la place du Coeur / Where the Heart Is in San Sebastian, to which he returned in 2004 with Mon père est ingenieur / My Father is an Engineer.

Michael Haneke (Munich, Germany, 1942), one of the essential directors of today’s cinema, will present Happy End. The author of Funny Games (1997), La pianiste / The Piano Teacher (2001), Das Weisse Band /The White Ribbon (2009) and Amour / Love (2012) has been acclaimed throughout his career with around a hundred awards coming from festivals and international accolades. Happy End, his snapshot from the life of a bourgeois European family, was selected for the Cannes Official Selection.

Hirokazu Koreeda (Tokyo, 1962), who has competed four times for the Golden Shell -Wandafuru raifu / After Life (1998), Hana yori mo naho / Hana (2006), Aruitemo, aruitemo / Still Walking (2008) and Kiseki / I Wish (2011), winner of the Best Screenplay Award – has won San Sebastian’s Audience Award twice: in 2013 with Soshite chichi ni naru / Like Father Like Son and in 2015 with Umimachi Diary / Our Little Sister. In Sando-me no satsujin / The Third Murder, to compete at Venice, he follows a lawyer who doubts his client’s guilt.

Xavier Legrand, whose short Avant que de tout perdre won the César, four awards at Clermont-Ferrand and landed an Academy Award nomination, debuts in feature films with the story of a son of divorced parents with his shared custody. Jusqu’à la garde / Custody has been selected for the official selection in Venice.

Martin McDonagh (Camberwell, United Kingdom, 1970) won, with Six Shooter (2004), the Academy Award for Best Live Action Short Film. His first feature film, In Bruges (2008), won the BAFTA for Best Original Screenplay and an Oscar nomination in the same category, and his second, Seven Psychopaths (2012) received the Audience Award in Toronto’s Midnight Madness section. In Three Billboards Outside Ebbing, Missouri, to compete at Venice, he narrates the confrontation between a woman (Frances McDormand), whose daughter was murdered months ago without the culprit being arrested, and the local police, headed by two officers played by Woody Harrelson and Sam Rockwell.

After placing his camera in a Danish regiment in Afghanistan (Armadillo) and shooting an episode of the series True Detective, Janus Metz (Denmark, 1974) presents Borg/McEnroe. The film, to open Toronto Festival, recreates the 1980 Wimbledon final between the Swedish and North American tennis players.

Lynne Ramsay (Glasgow, United Kingdom,1969) competed at Cannes with her previous film We Need to Talk About Kevin (2011), winner of Best Director at the British Independent Film Awards and Best European Actress Award (Tilda Swinton). You Were Never Really Here, written and directed by the Scottish filmmaker, was acknowledged with the Best Screenplay and Best Actor (Joaquin Phoenix) Awards at the last Cannes Festival.

Paolo Virzì (Livorno, Italy, 1964) is one of today’s most important Italian directors. Some of his most remarkable films are Il capitale umano / Human Capital (2013), winner of the David di Donatello Awards for Best Screenplay, Director and Actress, and his penultimate work, La pazza gioia / Like Crazy (2016), winner of the David for Best Film and, once again, Best Director and Best Actress. The Leisure Seeker, starring Helen Mirren and Donald Sutherland, is his first film shot in the USA and will compete at Venice.

These titles join the others already announced: Teströl és lékekröl / On Body and Soul by Ilkidó Eneydi; Nelyubov / Loveless by Andrey Zvyagintsev; 120 battements par minute (120 BMP) / 120 Beats Per Minute, by Robin Campillo; Wonderstruck, by Todd Haynes; The Big Sick, by Michael Showalter; Call Me By Your Name, by Luca Guadagnino; and Loving Pablo, by Fernando León de Aranoa, which will close the section out of competition.

The City of Donostia / San Sebastian Audience Award is split into two accolades: the Best Film Award, with 50,000 euros, and the Best European Film, with 20,000 euros. 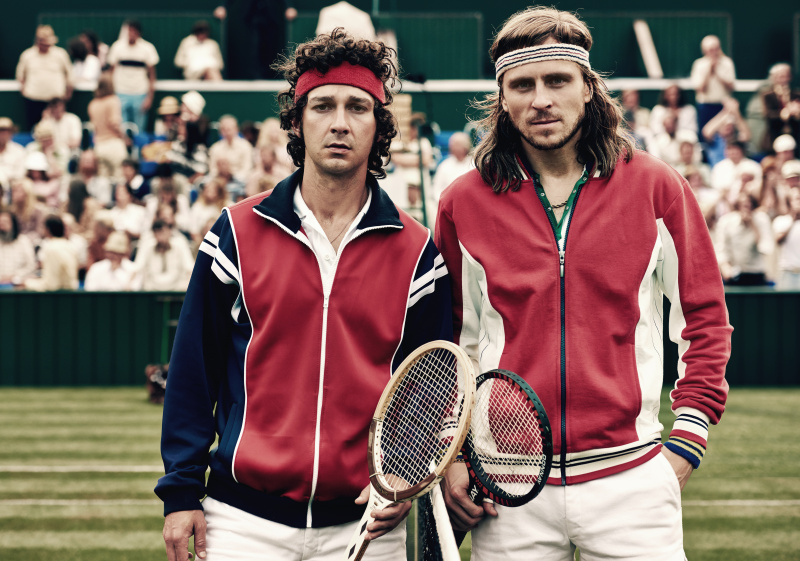 Biopic about the rivalry between two of world tennis's biggest icons : the imperturbable Björn Borg and the temperamental North American John McEnroe, through their legendary confrontation at Wimbledon 1980. Two sportsmen completely different from one another who became legends and the price they had to pay for it. Fire and ice on the court. 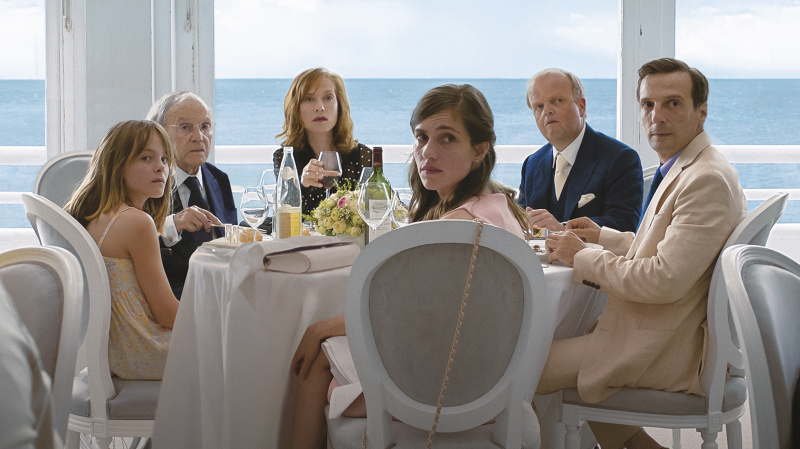 All around us, the world, and we, in its midst, blind. A snapshot from the life of a bourgeois European family. 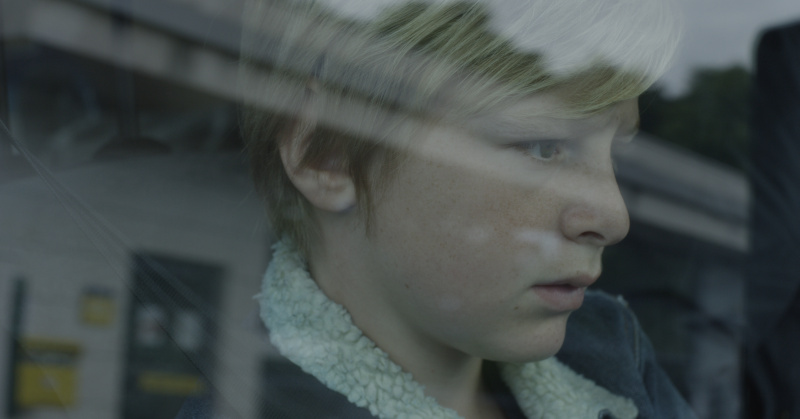 Myriam and Antoine are divorced. She asks for exclusive guardianship to protect her young son from her violent husband, but the judge decides to award both spouses shared custody. The victim of a jealous father, in the endeavour to protect his abused mother, Julien will do everything he can to stop the worst from happening. 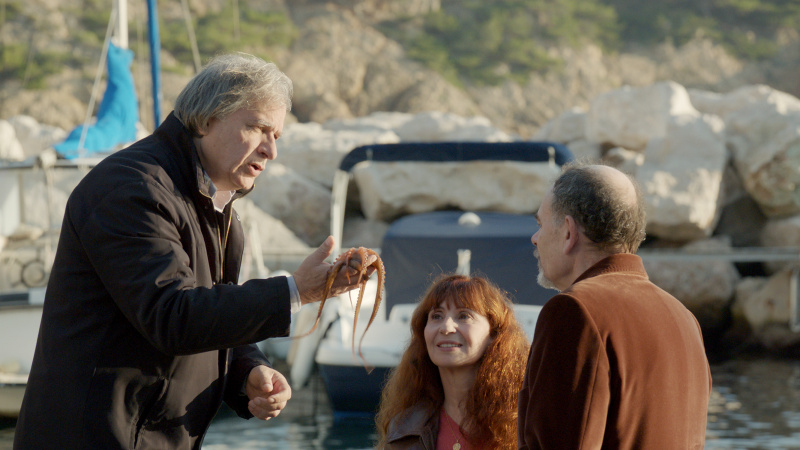 In a little cove near Marseille, at the height of winter, Angèle, Joseph and Armand return to their elderly father’s home. Angèle is an actress living in Paris and Joseph has just fallen in love with a girl half his age. Armand is the only one who had stayed behind in Marseille to run his father’s small restaurant. It’s time for them to weigh up what they have inherited of their patriarch’s ideals and the community spirit he created in this magical place around a restaurant for workers. But the arrival of a group of boat people will change their reflections… 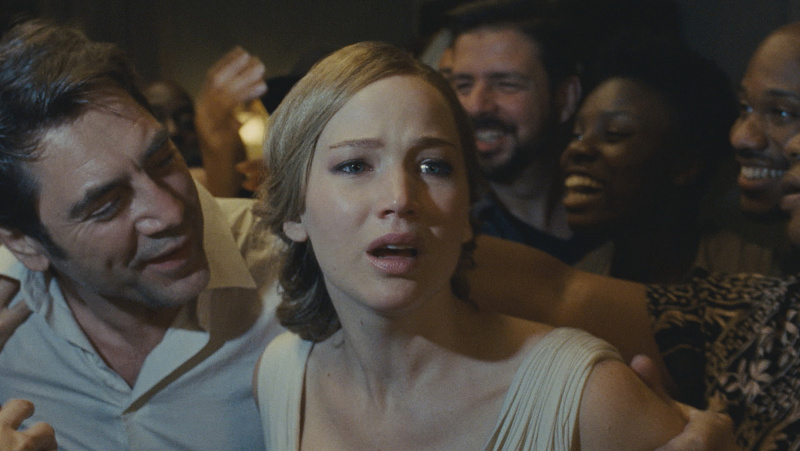 A couple’s relationship is tested when uninvited guests arrive at their home, disrupting their tranquil existence. A riveting psychological thriller about love, devotion and sacrifice.

Attorney Shigemori takes on the defence of murder-robbery suspect Misumi who served jail time for another murder 30 years ago. Shigemori’s chances of winning the case seem low - his client freely admits his guilt, despite facing the death penalty if he is convicted. But as he digs deeper into the case and hears the testimonies of Mishumi and his family, Shigemori begins to doubt whether his client is the murderer after all. 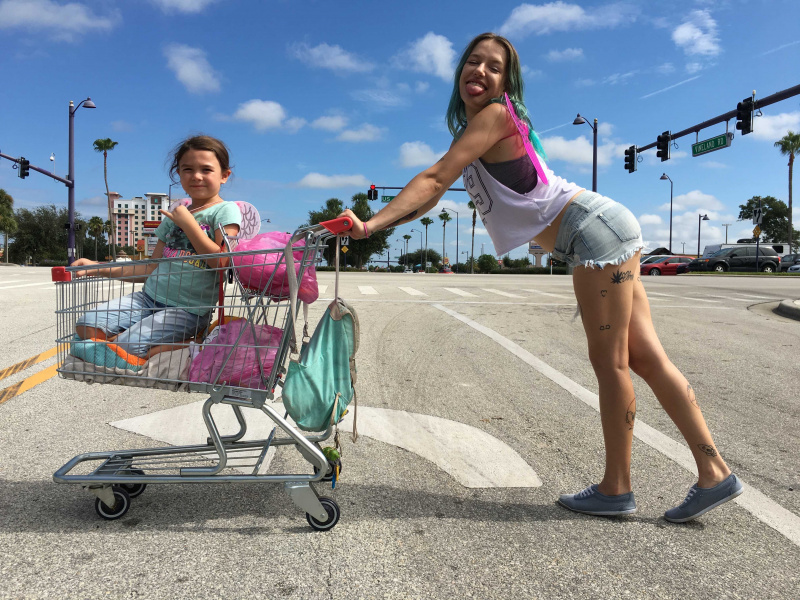 The Florida Project tells the story of Moonee, a precocious six-year-old and her ragtag group of friends whose summer break is filled with childhood wonder, possibility and a sense of adventure, while the adults around them struggle with hard times. All over the United States, cheap motels have become the last refuge for those unable to secure a permanent home. These invisible destitute people are increasingly greater in number, and 41% are families who struggle every day to keep a roof over their heads. This story is set in the suburbs of Orlando, holiday capital par excellence, home to “the most magical place on earth”. All along the road wending through the land of theme parks and resorts, the cheap hotels that in their day attracted tourists, exploiting the mysticism of Disney, now house homeless families. Moonee and her mother Halley, 22, live in one of these places: the Magic Castle Motel.

Ella and John are fleeing the suffocating care of their doctors and grown children. He is distracted but strong. She is frail but sharp. The journey aboard their faithful old camper takes them from Boston to Key West in the USA. Sharing moments of exhilaration and anguish, they recapture their passion for life and their love for others, seeing differently and with perspective the things they’ve left behind. And this means that the way they see each other too will change during their adventure. 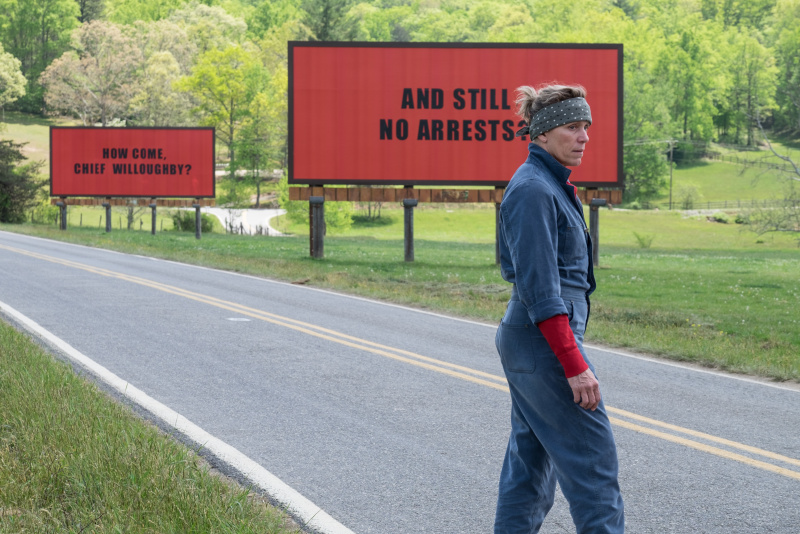 After months have passed without a culprit in her daughter’s murder case, Mildred Hayes makes a bold move, painting three signs leading into her town with a controversial message directed at William Willoughby, the town’s revered chief of police. When his second-in-command officer, Dixon, an immature mother’s boy with a penchant for violence, gets involved, the battle between Mildred and Ebbing’s law enforcement is only exacerbated.

A missing teenage girl. A brutal and tormented enforcer on a rescue mission. Corrupt power and vengeance unleash a storm of violence that may lead to his awakening. 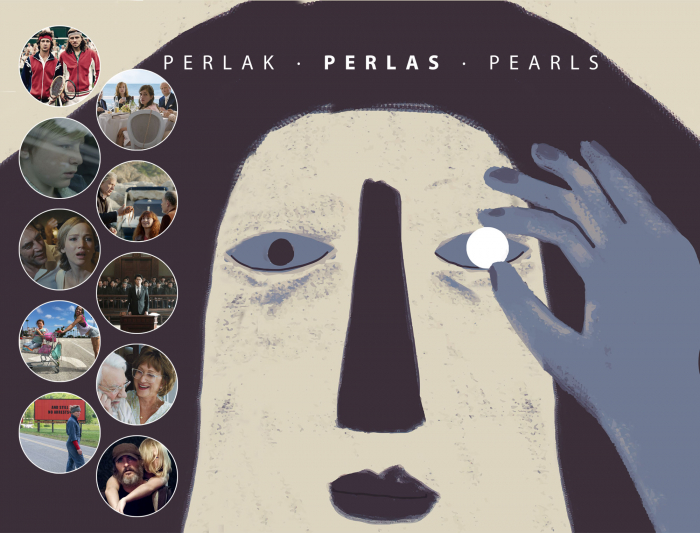 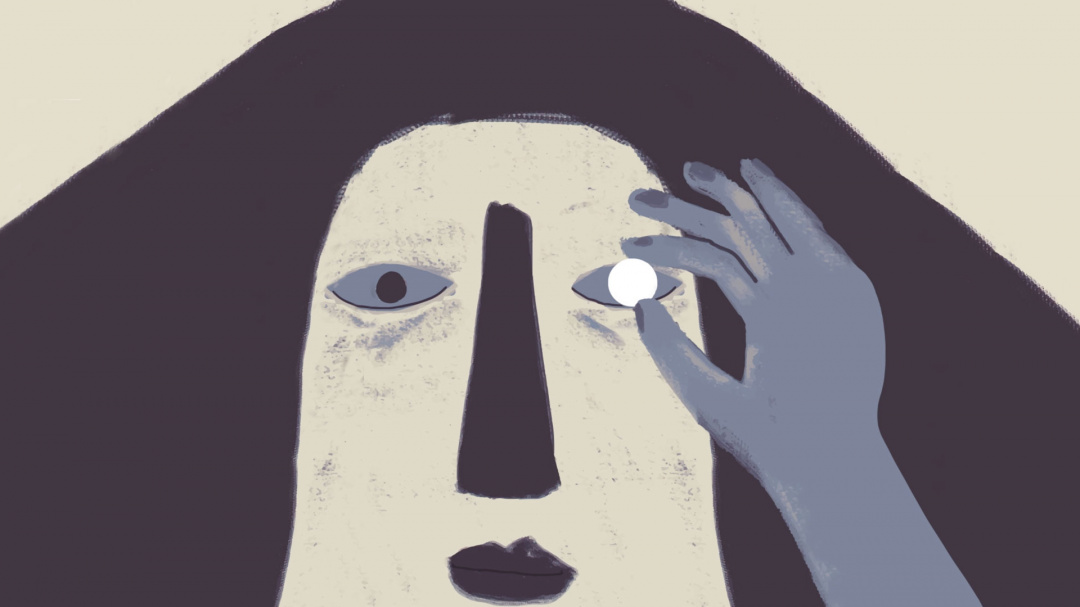