Jointly organised by the Festival and Tabakalera-International Centre for Contemporary Culture, the Meeting enjoys the support of San Sebastian 2016, European Capital of Culture, which supports the audiovisual creation to transform Donostia / San Sebastián into a referent focus of small and medium format productions.

The selected shorts will be presented at sessions open to the general public and Festival guests and attended by professionals from the audiovisual sector. The general public, students and professionals will watch and comment on the films, generating debates on cinematic practice and theory.

The 14th International Film Students Meeting offers film school students the opportunity to discover the world of cinema first hand thanks to the experience of the long-standing professionals (directors, producers, distributors, critics, etc.) who visit the Meeting to share their knowledge with filmmakers in the making.

A jury of students from the participating schools chaired by Benedikt Erlingsson will grant the Panavision Award, carrying a complete camera package including RED Epic camera and Primo standard lenses for four weeks of filming, or a voucher worth €10,000 for renting any kind of Panavision material, for the winning director; the Freak Agency / Feelsales Award that includes the free submissions of the winner film to 50 international film festivals selected by the team of Freak and Worldwide sales agreement except for the school’s country of origin; and the BioBioCine – Duoc UC Award with which the short film awarded with the Panavision Award and the Freak Agency / Feelsales Award will be directly shortlisted for the next BioBioCine Festival Internacional Concepción Chile. The Jury will also name three candidate directors to participate with their works in the Short Film Corner at the next Cannes Festival.

Furthermore, a specific jury will give the Orona Award to the most cutting-edge short film of the Meeting, with an endowment of €5,000. This Jury will consist of students from Basque schools, coordinated by a professor from the Mondragon University, and chaired by the Orona Fundazioa’s Development Director.

Last but not least, a representative from the TorinoFilmLab will be in charge of awarding one of the directors taking part in the Meeting, with the Torino Award with which the winner will be guaranteed attendance to a TorinoFilmLab programme within two years after the award is given.

The Meeting will also include the out-of-competition screening of three short films. Two of them from the Atelier Ludwigsburg-Paris, a project that fosters international collaboration and production processes. It involves participation of the film schools La Fémis and the Filmakademie in Baden-Württemberg. The third one is part of the collaboration between the San Sebastian Film Festival and BioBioCine, Festival Internacional de Concepción, Chile. A Festival, that as well as the Meeting does, it fosters the film students’ exchange of experiences and knowledge in the audiovisual field.

The Meeting’s programme will be completed with three master classes (registration in advance is required). The first one will be taught by the American filmmakers Charlie Kaufman and Duke Johnson who, after passing through the Venice Film Festival, they come to San Sebastian to present the film Anomalisa in the Pearls Section. The second master class will be led by the Chinese film director Jia Zhangke whose film Mountains May Depart will also be part of the section after being presented at the last edition of the Cannes Film Festival. Finally, the young Portuguese director João Salaviza will show the students a selection of his short films and will talk with them about his experience of directing his first feature film, Montanha, which will participate in the Zabaltegi Section.

The meeting gathers students from film schools all over the world to attend screenings of their previously selected short films, discussions and master classes given by industry professionals. A competition between the short films presented at the meeting will also be called where a student jury, chaired by a prestigious filmmaker, will choose the winner of the Panavision Award, the Freak Agency / Feelsales Award and the BioBioCine – Duoc UC Award. The jury will similarly decide the names of the three directors given the opportunity to participate in the Short Film Corner at Cannes. Moreover, a member of the TorinoFilmLab in its representation will award one of the directors with the Torino Award. Finally, a specific jury formed by students from Basque schools, coordinated by a teacher from the University of Mondragon and chaired by the Development Management Department of Orona Fundazioa, will give the Orona Award to the most cutting-edge short film in the Meeting.

The selected short films will be screened at showings open to the general public. Groups with more than 15 members, please contact us on eiecine@sansebastianfestival.com 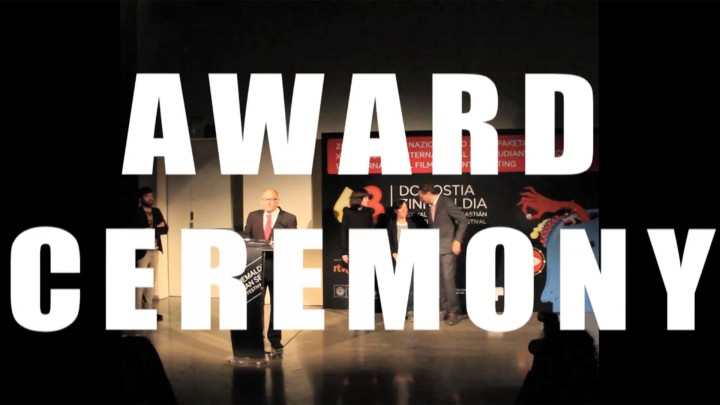